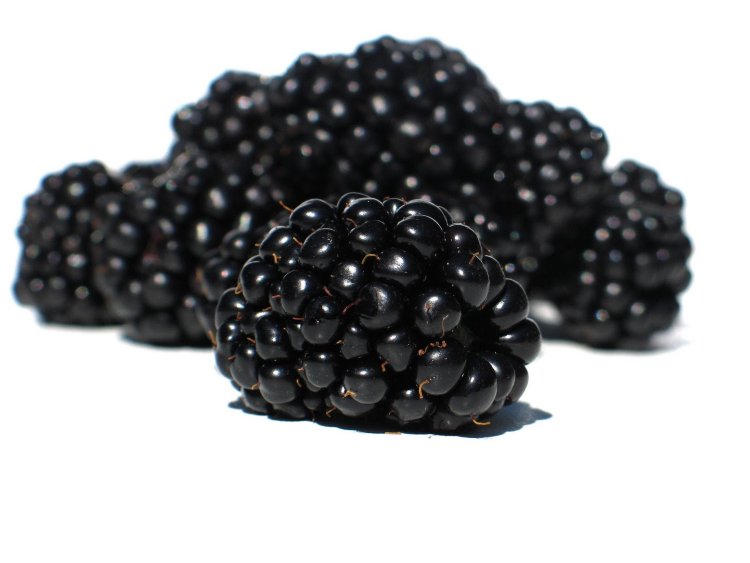 Blackberry Bush in a 3 Gallon Container. Blackberries are extremely tolerant of site and soil conditions. They are especially unusual in that they will produce a reasonable crop of berries even when grown in deep shade. Delicious both cooked or eaten fresh, they are bursting with flavour and excellent for your health, good anti-oxidant. Blackberries produce their flowers very late in the season so frost will never be a problem. Low lying land or frost pockets are quite suitable for blackberries. Cold Hardy.

The blackberry (or bramble raspberry) is a widespread and well known shrub; commonly called a bramble in the eastern U.S. and Europe. (Genus Rubus, Family Rosaceae) growing to 3 m (10 ft) and producing a soft-bodied fruit popular for use in desserts, jams, seedless jellies and sometimes wine. Several Rubus species are called blackberry and since the species easily hybridize, there are many cultivars with more than one species in their ancestry. The blackberry has a tangle of dense arching stems carrying short curved very sharp spines (although many thornless/spineless cultivars have been developed), the branches rooting from the node tip when they reach the ground. Individual stems can reach in excess of 10 feet in length. It is very pervasive, growing at fast daily rates in woods, scrub, hillsides and hedgerows, colonizing large areas in a relatively short time. It will tolerate poor soil, and is an early coloniser of wasteland and building sites. It has palmate or pinnate compound leaves of three to five leaflets with flowers of white or pink appearing from May to August, ripening to a black or dark purple fruit, the "blackberry." The blackberry is also the fruit of the blackberry plant. In proper botanical language, it is not a berry at all, but instead an aggregate fruit of numerous drupelets. In the photo at the upper right, the early flowers have formed more drupelets than the later ones. This can be a symptom of exhausted reserves in the plant's roots, marginal pollinator populations, infection with a virus such as Raspberry bushy dwarf virus (RBDV), or where a small change in conditions, such as a rainy day or a day too hot for bees to work after early morning, can reduce the number of bee visits/pollen grains delivered to the flower, thus reducing the quality of the fruit. The drupelets only develop around ovules which are fertilized by the male gamete from a pollen grain. Blackberry blossoms are good nectar producers, and large areas of wild blackberries will yield a medium to dark, fruity honey

The blackberry is known to contain polyphenol antioxidants, naturally occurring chemicals that can upregulate certain beneficial metabolic processes in mammals. It is not advisable to use or eat blackberries growing close to busy roads due to the accumulated toxins from the traffic. The astringent blackberry root is sometimes used in herbal medicine as a treatment for diarrhea and dysentery. The related but smaller European dewberry (R. caesius) can be distinguished by the white, waxy coating on the fruits, which also usually have fewer drupelets. (Rubus caesius) is in its own section (Caesii) within the Rubus subgenus. In some parts of the world, such as in Chile, New Zealand and the Pacific Northwest region of North America, some blackberry species, particularly Rubus armeniacus (syn. R. procerus, 'Himalaya') and Rubus laciniatus ('Evergreen') are naturalized and considered an invasive species and a serious weed. As there is forensic evidence from the Iron Age Haraldskær Woman that she consumed blackberries some 2500 years ago, it is reasonable to conclude
that blackberries have been eaten by humans over thousands of years.

Blackberry production in Mexico has exploded in the past decade. While this industry was initially based on the cultivar 'Brazos' it is now based on 'Tupy'. 'Brazos' was an old erect blackberry cultivar developed in Texas in 1959. 'Tupy' was developed in Brazil and released in the late 1990s. 'Tupy' has the erect blackberry 'Comanche' as one parent, but the other parent is unknown. In order to produce these blackberries in these areas of Mexico where there is no winter chilling to stimulate flower bud development, chemical defoliation and application of growth regulators are used to bring the plants into bloom.