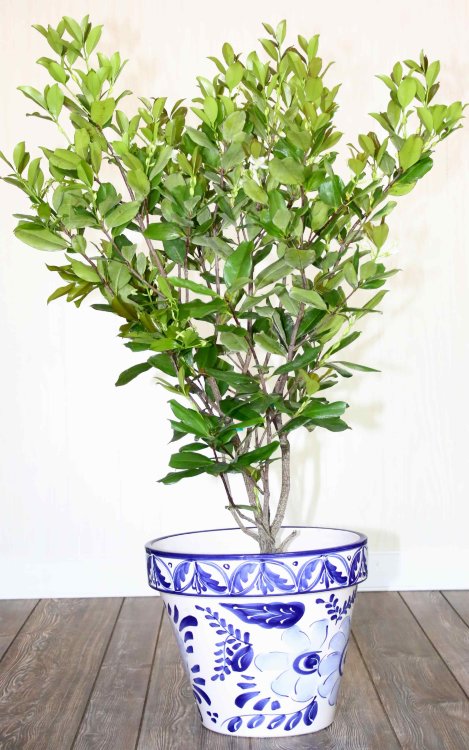 Grumichama Tree in a 3 Gallon Container. The grumichama is a small, compact tree that can be grown as a standard or shaped as a hedge. The plants have beautiful glossy dark green leaves and rough corky textured bark. Fruit deep purple to black when ripe and they have a flavor very similar to that of jaboticaba. They are most often eaten fresh and used in jelly. Very popular in Brazil and South America. Can be used to make a nice edible hedge.

An often admired but still very minor fruiting member of the rnMyrtaceae, the grumichama, in Brazil, is sometimes called the Brazil cherry rnelsewhere.

The highly ornamental tree is slender, erect, usually to 25 or 35 ft high, rnshort-trunked and heavily foliaged with opposite, oblong-oval leaves 3 1/2 to 5 in rn(9-16 cm) long, 2 3/8 in (5-6 cm) wide, with recurved margin; glossy, thick, leathery, rnand minutely pitted on both surfaces. They persist for 2 years. New shoots are rosy. rnThe flowers, borne singly in the leaf axils, are 1 inch wide; have 4 green sepals and 4 rnwhite petals, and about 100 white stamens with pale-yellow anthers. The long-stalked rnfruit is oblate, 1/2 to 3/4 wide; turns from green to bright-red and finally rndark-purple to nearly black as it ripens, and bears the persistent, purple- or rnred-tinted sepals, to 1/2 in long, at its apex. The skin is thin, firm and exudes rndark-red juice. The red or white pulp is juicy and tastes much like a true subacid or rnsweet cherry except for a touch of aromatic resin. There may be 1 more or less round, rnor 2 to 3 hemispherical, hard, light-tan or greenish-gray seeds to 1/2 in wide and rnhalf as thick.

The grumichama is native and wild in coastal southern Brazil, especially in the states rnof Parana and Santa Catarina. It is cultivated in and around Rio de Janeiro, also in rnParaguay. A specimen was growing in Hope Gardens, Jamaica, in 1880 and a tree was rnplanted in the Botanical Gardens, Singapore, in 1888, fruited in 1903. It has long rnsince vanished from both of these locations. An attempt to grow it in the Philippines rnin the early 1920's did not meet with success. Neither did a trial in Israel. An early rnintroduction, perhaps by Don Francisco de Paula Marin in 1791, was made in Hawaii and rnthe tree was adopted into numerous local gardens.
Over the years there have been mild efforts to encourage interest in the virtues of rnthe grumichama in Florida, mainly because of the beauty and hardiness of the tree and rnthe pleasant flavor of the fruit but the sepals are a nuisance and there is too little rnflesh in proportion to seed for the fruit to be taken seriously.

Variety Berg. in Brazil becomes a large tree to 65 ft (20 m) high and has fruits with rnwhite flesh. It is not as common as the red-fleshed type.

The grumichama is subtropical, surviving temperatures of 26º F (-3.33º C) in Brazil. rnIt is better suited to Palm Beach than to southern Florida. In Hawaii, the tree rnfruits best from sea-level to an altitude of no more than 300 ft (90 m).

The grumichama does better on acid sand in Central Florida than it does on limestone rnin the south. It is reported to prefer deep, fertile, sandy loam. Sturrock says it rngrows well in rich clay in Cuba but is adversely affected by the long, dry season.

Wilson Popenoe stated that propagation in Brazil is entirely by seeds which remain rnviable for several weeks and germinate in about a month. Fenzi says that seeds, rncuttings and air-layers are employed, and Sturrock has mentioned that grafting is easy. rn

The grumichama is of slow growth when young unless raised in a mixture of peat moss and rnsand and then given a thick layer of peat moss around the roots when setting out, and rnkept heavily fertilized. In Hawaii, it has taken 7 years to reach 7 ft. Fruiting begins rnwhen the plants are 4 to 5 years old.

The tree is regarded as remarkable for the short period from flowering to fruiting. In rnFlorida, it has been in full bloom in late April and loaded with fruits 30 days later. rnThe crop ripens quickly over just a few days. In Hawaii, the trees bloom and fruit from rnJuly to December, with the main crop in the fall. Trees in Brazil vary considerably in rntime of flowering and fruiting so that the overall season extends from November to rnFebruary.

In Hawaii, the fruits are heavily attacked by the Mediterranean fruit fly.

The bark and leaves contain 1.5% of essential oil. The leaf or bark infusion–1/3 oz (10 rng) of plant material in 10 1/2 oz (300 g) water-is aromatic, astringent, diuretic and rntaken as a treatment for rheumatism at the rate of 2 to 4 cups daily, in Brazil.