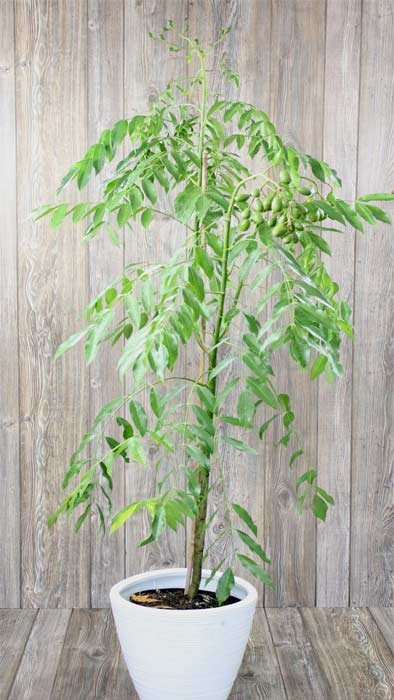 June Plum/Golden Apple Tree in a 3 Gallon Container. Native to South-east Asia and found in Venezuela, Brazil and Ecuador and parts of Central America. The dwarf ambarella is a fast growing plant that will produce fruit in less than one year, and at a height of only two feet. They are often eaten fresh, made into drinks and jellies that taste something like apple butter. They have a single sharp, rather large, spiny seed. They also fruit year round so one tree will provide more than enough fruit for a family. Can be container Grown.

The tree is rapid-growing, attaining a height of 60 ft (18 m) in its homeland; generally not more than 30 or 40 ft (9-12 m) in other areas. Upright and rather rigid and symmetrical, it is a stately ornamental with deciduous, handsome, pinnate leaves, 8 to 24 in (20-60 cm) in length, composed of 9 to 25 glossy, elliptic or obovate-oblong leaflets 2 1/2 to 4 in (6.25-10 cm) long, finely toothed toward the apex. At the beginning of the dry, cool season, the leaves turn bright-yellow and fall, but the tree with its nearly smooth, light gray-brown bark and graceful, rounded branches is not unattractive during the few weeks that it remains bare. Small, inconspicuous, whitish flowers are borne in large terminal panicles. They are assorted, male, female and perfect in each cluster. Long-stalked fruits dangle in bunches of a dozen or more; oval or somewhat irregular or knobby, and 2 1/2 to 3 1/2 in (6.25-9 cm) long, with thin but tough skin, often russetted. While still green and hard, the fruits fall to the ground, a few at a time, over a period of several weeks. As they ripen, the skin and flesh turn golden-yellow. While the fruit is still firm, the flesh is crisp, juicy and subacid, and has a somewhat pineapple-like fragrance and flavor. If allowed to soften, the aroma and flavor become musky and the flesh difficult to slice because of conspicuous and tough fibers extending from the rough ridges of the 5-celled, woody core containing 1 to 5 flat seeds. Some fruits in the South Sea Islands weigh over 1 lb (0.45 kg) each.

The ambarella is native from Melanesia through Polynesia and has been introduced into tropical areas of both the Old and New World. It is common in Malayan gardens and fairly frequent in India and Ceylon. The fruits are sold in markets in Vietnam and elsewhere in former Indochina. It first fruited in the Philippines in 1915. It is cultivated in Queensland, Australia, and grown on a small scale in Gabon and Zanzibar. It was introduced into Jamaica in 1782 and again 10 years later by Captain Bligh, probably from Hawaii where it has been grown for many years. It is cultivated in Cuba, Haiti, the Dominican Republic, and from Puerto Rico to Trinidad; also in Central America, Venezuela, and Surinam; is rare in Brazil and other parts of tropical America. Popenoe said there were only a few trees in the Province of Guayas, Ecuador, in 1924. The United States Department of Agriculture received seeds from Liberia in 1909, though Wester reported at that time that the tree had already been fruiting for 4 years in Miami, Florida. In 1911, additional seeds reached Washington from Queensland, Australia. A number of specimens are scattered around the tip of Florida, from Palm Beach southward, but the tree has never become common here. Some that were planted in the past have disappeared.

The tree flourishes in humid tropical and subtropical areas, being only a trifle tenderer than its close relative, the mango. It succeeds up to an altitude of 2,300 ft (700 m). In Israel, the tree does not thrive, remaining small and bearing only a few, inferior fruits.

The ambarella grows on all types of soil, including oolitic limestone in Florida, as long as they are well-drained.

The tree is easily propagated by seeds, which germinate in about 4 weeks, or by large hardwood cuttings, or air-layers. It can be grafted on its own rootstock, but Firminger says that in India it is usually grafted on the native S. pinnata Kurz (see below). Wester advised: "Use non-petioled, slender, mature, but green and smooth budwood; cut large buds with ample wood-shield, 1 1/2 to 1 3/4 in (4-4.5 cm) long; insert the buds in the stock at a point of approximately the same age and appearance as the scion."

Seedlings may fruit when only 4 years old. Ochse recommends that the young trees be given light shade. Mature trees are somewhat brittle and apt to be damaged by strong winds; therefore, sheltered locations are preferred.

In Hawaii, the fruit ripens from November to April; in Tahiti, from May to July. In Florida, a single tree provides a steady supply for a family from fall to midwinter, at a time when mangos and many other popular fruits are out of season.

Ochse says that in Indonesia the leaves are severely attacked by the larvae of the kedongdong spring-beetle, Podontia affinis. In Costa Rica, the bark is eaten by a wasp ("Congo"), causing necrosis which leads to death. No particular insects or diseases have been reported in Florida. In Jamaica, the tree is subject to gummosis and is consequently short-lived.

The ambarella has suffered by comparison with the mango and by repetition in literature of its inferior quality. However, taken at the proper stage, while still firm, it is relished by many out-of-hand, and it yields a delicious juice for cold beverages. If the crisp sliced flesh is stewed with a little water and sugar and then strained through a wire sieve, it makes a most acceptable product, much like traditional applesauce but with a richer flavor. With the addition of cinnamon or any other spices desired, this sauce can be slowly cooked down to a thick consistency to make a preserve very similar to apple butter. Unripe fruits can be made into jelly, pickles or relishes, or used for flavoring sauces, soups and stews. Young ambarella leaves are appealingly acid and consumed raw in southeast Asia. In Indonesia, they are steamed and eaten as a vegetable with salted fish and rice, and also used as seasoning for various dishes. They are sometimes cooked with meat to tenderize it.

Wood: The wood is light-brown and buoyant and in the Society Islands has been used for canoes.

In Cambodia, the astringent bark is used with various species of Terminalia as a remedy for diarrhea.