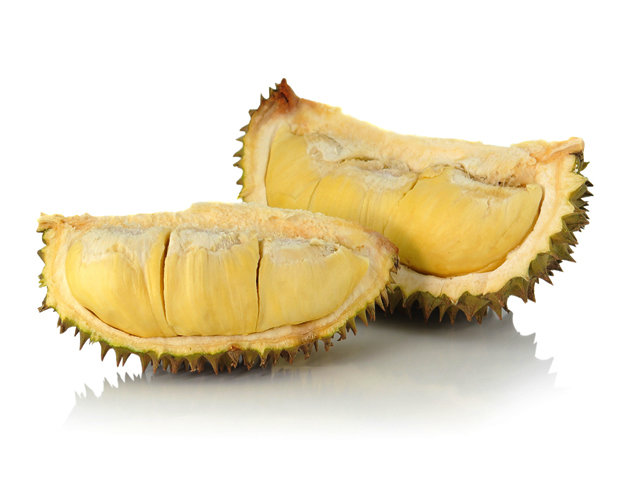 Durian tree in a 3 gallon container. This is a highly unusual fruit produced in tropical countries in Southeast Asia. It is extraordinary in several aspects: In size, it is among the largest fruits in the world, second only to the breadfruit and the Jackfruit. In appearance, the hundreds of hard spikes on its skin are unique. In price, it is the most expensive even in a producing country. In taste, its rich, exotic flavor is incomparable. Yet, in smell, it is considered fetid and offensive by some, especially foreigners who have not tasted the fruit before.

The five cells are silky-white within, and are filled with a mass of firm, cream-coloured pulp, containing about three seeds each. This pulp is the edible part, and its consistence and flavour are indescribable. A rich custard highly flavoured with almonds gives the best general idea of it, but there are occasional wafts of flavour that call to mind cream-cheese, onion-sauce, sherry-wine, and other incongruous dishes. Then there is a rich glutinous smoothness in the pulp which nothing else possesses, but which adds to its delicacy. It is neither acidic nor sweet nor juicy; yet it wants neither of these qualities, for it is in itself perfect. It produces no nausea or other bad effect, and the more you eat of it the less you feel inclined to stop. In fact, to eat Durians is a new sensation worth a voyage to the East to experience. ... as producing a food of the most exquisite flavor it is unsurpassed. Description given by British naturalist Alfred Russel Wallace