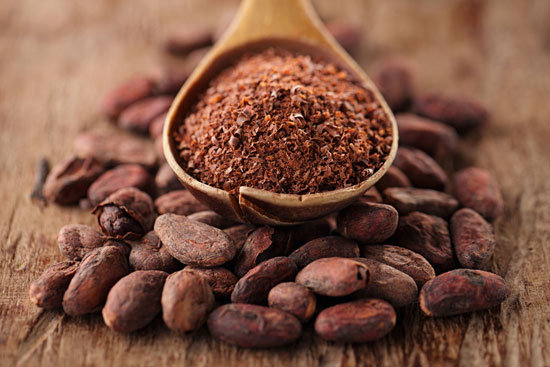 Cacao Tree/Chocolate Tree in a 3 Gallon Container. This is the tree that produces Cacao pods and beans and ultimately chocolate. The cacao tree produces flowers and fruit year-round. The cacao tree is small and comes from the forests of Central and South America. In many cacao-producing countries the cacao beans are locally used for making "cocoa tea". Makes a great conversation Tree.

The tree is a small, tropical evergreen, up to 25 feet, with thick, oblong-oval, entire leaves. The cacao "beans" are produced in large, angular capsules, up to a foot long and 4 inches diameter. The capsule rind is thick, hard and leathery. The capsules are borne along the trunk and main branches. The beans, or seeds, about an inch across, range from 20 to 40 per capsule, and are imbedded in an acid, fleshy pulp. After removal from the capsule, the beans are washed or fermented to remove the mucilagenous pulp. Chocolate is the sweetened or unsweetened product of the roasted and ground beans, with most of the fat retained. Cocoa of commerce is the finely ground product, with most of the fat removed. Both forms are very widely used in confections, ice cream, cookery, and drinks. Cacao is not grown in continental U.S. Over 600 million pounds of the beans are imported annually, mainly from Africa and South America.

Cacao was named Theobroma by Linnaeus, the word meaning 'food of the gods,' so called from the goodness of its seeds. Mexicans named the pounded seeds 'Chocolate.' The tree is handsome, 12 to 16 feet high; trunk about 5 feet long; wood light and white coloured; bark brown; Ieaves lanceolate, bright green, entire; flowers small reddish, almost odourless; fruit yellowy red, smooth; rind fleshcoloured; pulp white; when seeds are ripe they rattle in the capsule when shaken; each capsule contains about twenty-five seeds; if separated from the capsule they soon become infertile, but if kept therein they retain their fertility for a long time. The tree bears its leaves, flowers and fruit (like the orange tree) all the year round, but the usual season for gathering the fruit is June and December. In Mexico during the time of the Aztec kings the small seeds were utilized as coins twelve approximating to the value of 1d., the smallest actual coin in use then being worth about 6d. The seeds were necessary for small transactions. The method is still in use in some parts of Mexico. The tree is generally cultivated on large estates under the shade of other trees, such as the banana and develops the pods continuously. When ripe they are cut open and the beans or nuts surrounded by their sweetish acid pulp are allowed to ferment so that they may be more easily separated from the shell. The beans are then usually dried in the sun, though sometimes in a steam drying shed.

Cocoa is prepared by grinding the beans into a paste between hot rollers and mixing it with sugar and starch, part of the fat being removed. Chocolate is prepared in much the same way, but the fat is retained. Oil of Theobroma or cacao butter is a yellowish white solid, with an odour resembling that of cocoa, taste bland and agreeable; generally extracted by expression. It is used as an ingredient in cosmetic ointments and in pharmacy for coating pills and preparing suppositories. It has excellent emollient properties and is used to soften and protect chapped hands and lips. Theobromine, the alkaloid contained in the beans, resembles caffeine in its action, but its effect on the central nervous system is less powerful. Its action on muscle, the kidneys and the heart is more pronounced. It is used principally for its diuretic effect due to stimulation of the renal epithelium; it is especially useful when there is an accumulation of fluid in the body resulting from cardiac failure, when it is often given with digitalis to relieve dilatation. It is also employed in high blood pressure as it dilates the blood-vessels. It is best administered in powders or cachets.