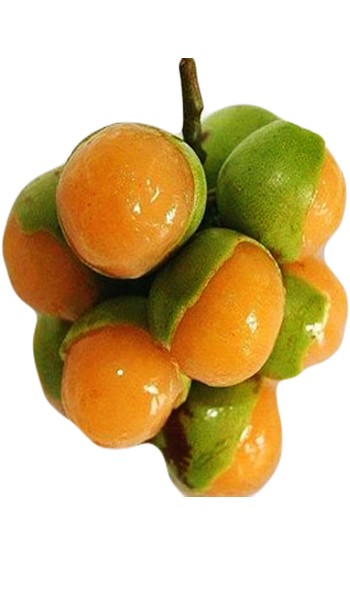 Spanish Lime/Genip/Genepa/Mamoncillo MALE GRAFTED or AIRLAYERED in a 3 Gallon Container. Both a male and female tree are required to produce fruit. The Spanish Lime is a very close relative of the Lychee and Longan. It is a very well known and highly regarded fruit throughout Latin America. The pulp is tart and melting, and it clings tenaciously to the seeds.

The mamoncillo tree is slow-growing, erect, stately, attractive; to 85 ft (25 m) high, with trunk to 5 1/2 ft (1.7 m) thick; smooth, gray bark, and spreading branches. Young branchlets are reddish. The leaves are briefly deciduous, alternate, compound, having 4 opposite, elliptic, sharp-pointed leaflets 2 to 5 in (5-12.5 cm) long and 1 1/4 to 2 1/2 in (3.25-6.25 cm) wide, the rachis frequently conspicuously winged as is that of the related soapberry (Sapindus saponaria L.). The flowers, in slender racemes 2 1/3 to 4 in (6-10 cm) long, often clustered in terminal panicles, are fragrant, white, 1/5 to 1/3 in (5-8 mm) wide, with 4 petals and 8 stamens. Male and female are usually borne on separate trees but some trees are partly polygamous. The fruit clusters are branched, compact and heavy with nearly round, green fruits tipped with a small protrusion, and suggesting at first glance small unripe limes, but there the resemblance ends. The skin is smooth, thin but leathery and brittle. The glistening pulp (aril) is salmon-colored or yellowish, translucent, gelatinous, juicy but very scant and somewhat fibrous, usually clinging tenaciously to the seed. When fully ripe, the pulp is pleasantly acid-sweet but if unripe acidity predominates. In most fruits there is a single, large, yellowish-white, hard-shelled seed, while some have 2 hemispherical seeds. The kernel is white, crisp, starchy, and astringent.

The mamoncillo is native to Colombia, Venezuela, and the island of Margarita, also French Guiana, Guyana and Surinam. It is commonly cultivated and spontaneous in those countries, also in coastal Ecuador, the lowlands of Central America, the West Indies and in the Bahamas. In Florida, it is occasionally grown as far north as Ft. Myers on the West Coast and Palm Beach on the east; is much more plentiful in Key West, especially as a street tree. There are some specimens in California and in botanical gardens in the Philippines, Zanzibar, Hawaii and elsewhere. According to Britton, there was a tree about 30 ft (9 m) tall in Bermuda in 1914 but it had never bloomed. There are a few trees in Israel but none has flowered before 10 years of age.

Generally, the presence of a male tree is necessary to pollinate the flowers of trees that are predominantly female (or hermaphrodite functioning as female). However, in Cuba, some trees have sufficient numbers of flowers of both sexes to yield regularly large crops without interplanting.

The mamoncillo is not strictly tropical, for it ascends up to 3,300 ft (1,000 m) above sea-level in South America. It can stand several degrees of frost in Florida. Nevertheless, it is too tender to fruit in California though it has been planted there on various occasions. It is well adapted to areas of low rainfall. That of Key West ranges from 30 to 50 in (75-125 cm) annually. The tree can tolerate long periods of drought.

In Cuba, the tree is said to flourish in nearly all types of terrain but particularly in deep, rich soil of calcareous origin. It seems perfectly at home in the oolitic-limestone of southern Florida and the Florida Keys. In Colombia, it has been observed to grow on such poor soils that it has been adopted for planting in soil reclamation efforts. It is spontaneous especially in dry, coastal districts.

The mamoncillo is usually grown from seed but superior types should be vegetatively reproduced. Air-layering of fairly large branches, at least 2 in (5 cm) in diameter, is successful in the summer and there will be adequate root development in 5 to 6 weeks. Approach-grafting is feasible provided the rootstocks are raised in a lightweight medium, in plastic bags to facilitate attachment to the selected tree. Attempts to veneer-graft or chip-bud have generally failed.

Ordinarily, the mamoncillo, tree is given no care except for watering and fertilizing when first planted. Vegetatively propagated trees bear earlier than seedlings.

In Florida, the fruits ripen from June to September. In the Bahamas, the season extends from July to October. Ladders and picking poles equipped with cutters are necessary in harvesting fruits from tall trees. The entire cluster is clipped from the branch when sampling indicates that the fruits are fully ripe. At this stage, the rind becomes brittle but does not change color. If picked prematurely, the rind turns blackish, a sign of deterioration.

Because of the leathery skin, the fruit remains fresh for a long time and ships and markets well. The tropical horticulturist, David Sturrock, related that horsemen in Cuba often hung branches of mamoncillos on the saddle horn to enjoy and relieve thirst during long rides.

For eating out-of-hand, the rind is merely torn open at the stem end and the pulp-coated seed is squeezed into the mouth, the juice being sucked from the pulp until there is nothing left of it but the fiber. With fruits that have non-adherent pulp, the latter may be scraped from the seed and utilized to make pie-filling, jam, marmalade or jelly, but this entails much work for the small amount of edible material realized. More commonly, the peeled fruits are boiled and the resulting juice is prized for cold drinks. In Colombia, the juice is canned commercially. The seeds are eaten after roasting. Indians of the Orinoco consume the cooked seeds as a substitute for cassava.

It has been said that the pulp fibers coat the lining of the stomach, adversely affecting the health, but this has been denied by the Government Chemist of the Department of Science and Agriculture in Jamaica who declares that fatalities in children are the result of choking on the seed. When coated with pulp, it is very slippery, is accidentally swallowed and, because of its size, lodges in the throat, causing suffocation or strangulation.

Juice: A dye has been experimentally made from the juice of the raw fruit which makes an indelible stain.

Flowers: The flowers are rich in nectar and highly appealing to hummingbirds and honeybees. The honey is somewhat dark in color but of agreeable flavor. The tree is esteemed by Jamaican beekeepers though the flowering season (March/April) is short.

Leaves: In Panama, the leaves are scattered in houses where there are many fleas. It is claimed that the fleas are attracted to the leaves and are cast out with the swept-up foliage. Some believe that the leaves actually kill the fleas.

Wood: The heartwood is yellow with dark lines, compact, hard, heavy, fine-grained; inclined to decay out of doors, but valued for rafters, indoor framing, and cabinetwork.

In Venezuela, the astringent roasted seed kernels are pulverized, mixed with honey and given to halt diarrhea. The astringent leaf decoction is given as an enema for intestinal complaints.