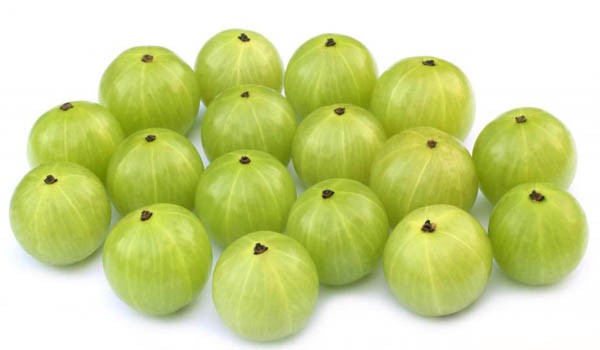 Gooseberry Tree in a 3 Gallon Container. This plant is a small tropical tree with ovate pointed leaves. It prefers a sunny location and regular waterings. It bears green fruit (yellow flesh) after the red flowers are finished blooming. The fruit is the size of a concord grape. The fruit is somewhat tart. It can be made into jelly.

Growth Habit: Gooseberries are deciduous shrubs, fast growing under optimum conditions to 3 feet tall and 6 feet wide. The plant is suitable for training as a standard. American types have weeping stems that will root wherever they touch the ground and can be invasive. Annual growth is in a single flush in spring. The roots are superficial, fine and easily damaged by frequent cultivation. Foliage: The buds perk up early in the spring, dotting the stems with green when most other plants are still tawny. The leaves are alternate, single, deeply lobed, and glossy dark green (European types), or pale to gray-green and sometimes finely pubescent (American types). The stems are thin, becoming woody, with a large thorn at each axil. American gooseberry stems are densely bristly, with one or more additional thorns at each axil. Leaf size and number are reduced under heat or light stress, and are easily burned by intense sunlight. Plants that have been subject to drought may make a new growth flush after deep irrigation. If the roots are lost, re-growth will wait until the following spring. Flowers: The inconspicuous flowers, green with pink flushed petals, open in early spring. They are borne laterally on one-year old wood and on short spurs of older wood. The flowers are self-fertile and pollinated by wind and insects, including bees. Each flower bud opens to yield from one to four flowers, depending on cultivar. Fruit: The fruit, borne singly or in pairs at the axils, is a berry with many minute seeds at the center. A gooseberry may be green, white (gray-green), yellow, or shades of red from pink to purple to almost black. Fruits of the European gooseberry may be very large, like a small plum, but are usually 1 inch long, less in width. American gooseberry fruits are smaller (to 1/2 inch), perfectly round, all becoming pink to wine-red at maturity. Skin color is most intense in full sunlight. Berries generally drop when overripe. The fruit has a flavor all its own, the best dessert cultivars as luscious as the best apple, strawberry or grape.

Location: Gooseberries like morning sun, afternoon part-shade and buoyant air circulation. They are most productive in full sunlight but the leaves sunburn easily under California conditions. They can be grown in the high shade of fruit trees such as persimmon or on the north side of buildings. American gooseberry are much more sun tolerant. Plants collapse quickly when soil or air temperature exceeds 85° F.

Gooseberry plants are less finicky about soil acidity than most other small fruits, and tolerate a wide range of soils, except those that are waterlogged. Where summers are hot, bushes will grow better and produce better fruit in heavier soils, which retain more moisture and stay cooler. A thick mulch of some organic material also helps keep the soil cool. Sandy soils are less suitable for gooseberries because they dry out too fast.

With their fibrous, shallow roots gooseberries are ideal for drip system. Keep the plants watered all season, since they will not regenerate buds or leaves lost from drought stress. Plants stressed for water are susceptible to mildew.

Gooseberries have a high requirement for potassium and a moderate need for nitrogen, although excessive amounts of nitrogen promote disease, especially mildew. Between four and eight ounces of actual nitrogen per square yard strikes a good balance between growth and disease tolerance. The symptom of potassium deficiency is scorching of leaf margins. Deficiency can be avoided with an annual dressing of half an ounce of potassium per square yard. Gooseberry plants also have a fairly high requirement for magnesium, so if the soil is very acidic and needs lime, use dolomitic limestone, which supplies magnesium as well as calcium. Pruning: A gooseberry bush is usually grown on a permanent short "leg" of about six inches, from which the bush is continually renewed with new shoots arising at or near ground level. Allow stems to grow for 4-5 years, then selectively remove oldest stems to make room for new shoots. Snap off any branches that form along or below the six-inch leg. Thorns make harvest tedious, so pruning is done to open up the bush and make picking easier. The plants may be grown as standards or cordons, but this requires a lot of care and the fruit often sunburns.

The ease with which gooseberries propagate from cuttings depends on the cultivar. Generally, American cultivars are easier to root than are European cultivars. Take hardwood cutting in early fall, even before all the leaves have dropped. The presence of a few leaves actually enhances rooting. Make the cuttings about a foot long, but do not include tip growth, dip the base in hormone and pot in ordinary soil. Keep in part shade for the first year. Tip layering is a surer method of propagation, though a single bush furnishes far fewer layers than cuttings. If intended for training as standards or cordons, strip all buds off, cutting below the soil line. Seeds require moist stratification, just above freezing, for three to four months. The plants commence bearing in 5 years from seed and 2 years from cuttings.

Aphids commonly attack young leaves, distorting them. Spider mites are common in summer; spray immediately after harvest and thereafter on a regular schedule. The clear-winged borer lays its eggs on stems in April. The larvae hatch and bore into the central pith down to soil line and emerge to pupate in the fall. An infestation is usually detected only after the stem wilts and dies. Borers will spread and generally causes loss of whole planting without quick control. Cut out affected stems, search for others and spray. The gooseberry sawfly is present in the Pacific Northwest but has not yet been detected in California. Its small green worms will hollow out the berries, leaving an empty husk.

Ribes species are host for White Pine blister rust, which causes few problems for gooseberry, but is lethal for 5-needle pines, including California natives such as Western Pine (Pinus monticola) and Sugar Pine (P. lambertiana). Gooseberries are banned in counties where these pines are grown for lumber. Botrytis and Anthracnose can cause rot of leaves and loss of young growth, particularly stems lying on the ground or splashed during irrigation. Gooseberry mildew is a common problem, affecting both European and American types. It is worst in coastal fog, on drought-stressed plants, or where irrigation is by overhead sprinkling. Keep plants turgid, never stressed for water between irrigations. Benomyl spray before flowering and after harvest should control it. Roots are susceptible to both Oak Root fungus (Armillaria mellea) and Phytophthora.

Average yield from one gooseberry bush is between eight and ten pounds of fruit. Gooseberries used for culinary purposes such as tarts, etc. are usually picked underripe. A classic gooseberry concoction is a fool, made by folding cream into the stewed fruit. For dessert purposes, however, the fruit must be fully ripe.

The European gooseberry is the classic gooseberry of cookery and and desserts. The American gooseberry is smaller, adapted to more demanding cultural conditions and more productive, but without much character and generally inferior for all purposes. As the European can be grown in all Californian conditions suited for the gooseberry culture, the American is not recommended. Market demand for American gooseberries is static, while appreciation for the true European berry is growing. Experimentation with European types is limited under California conditions, and many cultivars have been introduced in recent years. Only those with proven production are described. Growers in unsuitable climates, looking for a substitute for gooseberry, should consider the Jostaberry or Buffalo Currant (Ribes aureum).