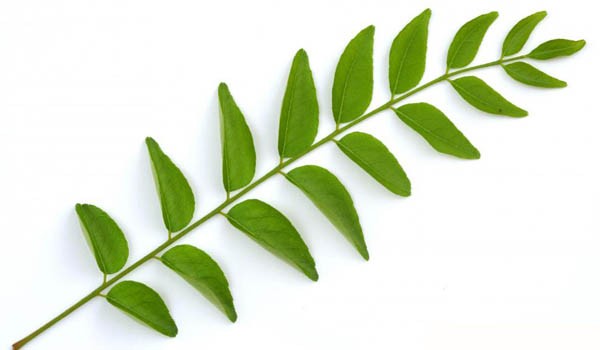 Curry Leaf/Limro Tree in a 3 gallon container. The curry leaf plant, is a native of Tropical Asia, southern India and Sri Lanka. Belonging to the Rutaceae family, the Murraya Koenigi plant grows to a height between 2 and five meters, depending on various factors. The leaves are small, pointed and in clusters, giving of a strong aroma faintly reminding one of citrus and anise. The aroma is delightful when added to curries and while frying spices, and lends that extra something to south Indian dishes. It also has many medicinal uses and is an anti-carcinegine as well as anti-oxidant. Can easily be kept in a container for easy access.

Curry leaf (Murraya koenigii Spreng., Rutaceae), is a popular leafy-spice used in Asian-Indian cuisine for its characterizing authentic flavor and distinct aroma (Fig. 1). The curry leaf is used by Asian Americans originating from South Asia almost daily in its fresh form when available and is preserved as dried or frozen for long-term storage. Interest in greater use of curry leaf has been stimulated since its high antioxidant and anticarcinogenic potential were reported (Khan et al. 1997; Khanum et al. 2000), as well as the changing demographics nationwide that have created a ready market and greater demand for this spice (Palaniswamy 2001).

The shiny-black fruits are liked both by children and adults. As revealed by the chemical composition of the fruits, they are very nutritious. The leaves are used as a spice in different curries and impart a very good flavour to the preparations. These fruits have also many medicinal properties.
The branches of Murraya koenigii (L.) Spreng. are very popular for cleaning the teeth as datun and are said to strengthen the gums and the teeth.
This plant is quite ornamental due to its compound leaves. It can, therefore, be used as a hedge and as an ornamental shrub.

The leaves, the bark and the roots of Murraya koenigii (L.) Spreng. can be used as a tonic and a stomachic. The bark and the roots are used as a stimulant by the physicians. They are also used externally to cure eruptions and the bites of poisonous animals. The green leaves are stated to be eaten raw for curing dysentery, and the infusion of the washed leaves stops vomiting.
A strong odiferous oil occurs in the leaves and the seeds of Murraya koenigii (L.) Spreng. The chemical examination of this oil has been made by Nigam and Purobit (1961). Gautam and Purobit (1974) reported that this essential oil exhibited a strong antibacterial and antifungal activity.
An alkaloid, murrayacinine, is also found in this plant.