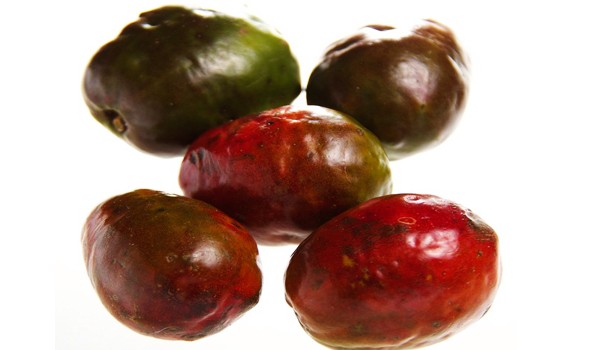 Mombin/Hogplum/Jocote Tree Red Fruit in a 3 Gallon Container. The trees go dormant in the winter and drop all of their leaves. As spring begins to break the trees begin to flower, and the fruit follows in 45-60 days. The fruit and flower of the hog plum occur right on the branches as opposed to hanging from the tips. They are usually eaten as fresh fruit or pickled green and eaten in East Indian cooking. The fruit are sweet unlike store bought plums.

The purple mombin may be a shrub or low-branched small tree in lowlands, or a spreading, thick-trunked tree reaching 25 or even 50 ft (7.5-15 m) in highlands. The branches are thickish and brittle. The deciduous, alternate, compound leaves bright-red or purple when young; 4 3/4 to 10 in (12-25 cm) long when mature; have 5 to 19 nearly sessile, obovate to lanceolate or oblong-elliptic leaflets 3/4 to 1 1/2 in (2-4 cm) long; oblique toward the base and faintly toothed toward the apex. The tiny, 4- to 5-petalled flowers, male, female and bisexual, are red or purple and borne in short, hairy panicles along the branches before the leaves appear. Somewhat plumlike, the fruits, borne singly or in groups of 2 or 3, may be purple, dark- or bright-red, orange, yellow, or red-and-yellow. They vary from 1 to 2 in (2.5-5 cm) in length and may be oblong, oval, obovoid or pear-shaped, with small indentations and often a knob at the apex. The skin is glossy and firm; the flesh aromatic, yellow, fibrous, very juicy, with a rich, plum-like, subacid to acid flavor, sometimes a trifle turpentiney; and it adheres to the rough, fibrous, hard, oblong, knobby, thick, pale stone, which is 1/2 to 3/4 in (1.25-2 cm) long and contains up to 5 small seeds.

The purple mombin is native and common both wild and cultivated from southern Mexico through northern Peru and Brazil, particularly in and zones. There are some recent commercial plantings in Mexico and Venezuela. It is commonly planted in most of the islands of the West Indies and the Bahamas. Everywhere the fruits are sold along the roads and streets as well as in the native markets. Spanish explorers carried this species to the Philippines, where it has been widely adopted. The tree is naturalized throughout much of Nigeria and occasionally cultivated for its fruit. It has been infrequently planted in southern Florida, mainly as a curiosity.
rn
Varieties

The fruit is highly variable. The yellow form (uncommon) has been identified by some botanists as S. purpurea forma lutea F. & R., or even as a separate species, S. cirouella Tassac. It has been confused with the true yellow mombin, S. mombin L. (syn. S. lutea L.), q.v. In Guatemala, the variety called jocote de corona, which is flattened and somewhat shouldered at the apex, is said to be of superior quality, and jocote tronador is nearly its equal.
rn
Climate

The tree is found growing naturally on a great diversity of soils throughout Latin America-sand, gravel, heavy clay loam, or limestone.

The purple mombin, including its yellow form, is grown very easily and quickly by setting large cuttings upright in the ground. It is one of the trees most used to create "living fences". It grows very slowly from seed.

There are flowers and fruits of the red form nearly all year in Jamaica, but mainly in July and August, while the yellow variant fruits only from September to November. In the Bahamas, the fruiting season of the red type is brief, just May and June; the yellow ripens from August to early October.

Fruit flies commonly infest the ripe fruits. In Florida, the foliage is subject to spot anthracnose caused by Sphaceloma spondiadis.

The ripe fruits are commonly eaten out-of-hand. While not of high quality, they are popular with people who have enjoyed them from childhood, and they serve a useful purpose in the absence of "snackbars". In the home, they are stewed whole, with sugar, and consumed as dessert. They can be preserved for future use merely by boiling and drying, which keeps them in good condition for several months. The strained juice of cooked fruits yields an excellent jelly and is also used for making wine and vinegar. It is a pleasant addition to other fruit beverages. In Mexico, unripe fruits are made into a tart, green sauce, or are pickled in vinegar and eaten with salt and chili peppers. The new shoots and leaves are acid and eaten raw or cooked as greens in northern Central America.

In the Philippines, it is said that eating a large quantity of the fruits on an empty stomach may cause stomachache.

Gum: The tree exudes a gum that has served in Central America as a glue.

Wood: The wood is light and soft; has been found to be suitable for paper pulp in Brazil. It is sometimes burned to ashes which are employed in making soap.

Leaves and fruits: The leaves are readily grazed by cattle and the fruits are fed to hogs.

Lac: Lac insects have been raised on the red mombin in Mexico.

In Mexico, the fruits are regarded as diuretic and antispasmodic. The fruit decoction is used to bathe wounds and heal sores in the mouth. A sirup prepared from the fruit is taken to overcome chronic diarrhea. The astringent bark decoction is a remedy for mange, ulcers, dysentery and for bloating caused by intestinal gas in infants. In the Philippines, the sap of the bark is used to treat stomatitis in infants. The juice of the fresh leaves is a remedy for thrush. A decoction of the leaves and bark is employed as a febrifuge. In southwestern Nigeria, an infusion of shredded leaves is valued for washing cuts, sores and burns. Researchers at the University of Ife have found that an aqueous extract of the leaves has antibacterial action, and an alcoholic extract is even more effective. The gum-resin of the tree is blended with pineapple or soursop juice for treating jaundice. Most of the other uses indicate that the fruits, leaves and bark are fairly rich in tannin.