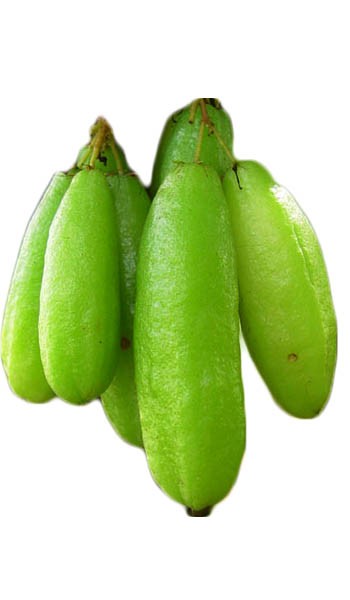 Bilimbi Tree in a 3 Gallon Container. This tree is commonly seen in backyards of many houses also called Bling-Bling or Birambi. It is sour in taste. Children like to eat them raw with little salt. They are used in many recipes as souring agents. These are available throughout the year. The tree bears hundreds of fruits. Fruits grow abundantly, and is used around the world to make a vareity of pickles.

The bilimbi, is closely allied to the carambola but quite different in appearance, manner of fruiting, flavor and uses. The only strictly English names are "cucumber tree" and "tree sorrel", bestowed by the British in colonial times. "Bilimbi" is the common name in India and has become widely used. In Malaya, it is called belimbing asam, belimbing buloh, b'ling, or billing-billing. In Indonesia, it is belimbing besu, balimbing, blimbing, or blimbing wuluh; in Thailand, it is taling pling, or kaling pring.
In Haiti, it is called blimblin; in Jamaica, bimbling plum; in Cuba, it is grosella china; in El Salvador and Nicaragua, mimbro; in Costa Rica, mimbro or tiriguro; in Venezuela, vinagrillo; in Surinam and Guyana, birambi; in Argentina, pepino de Indias. To the French it is carambolier bilimbi, or cornichon des Indes. Filipinos generally call it kamias but there are about a dozen other native names.

The tree is attractive, long-lived, reaches 16 to 33 ft (5-10 m) in height; has a short trunk soon dividing into a number of upright branches. The leaves, very similar to those of the Otaheite gooseberry and mainly clustered at the branch tips, are alternate, imparipirmate; 12 to 24 in (30-60 cm) long, with 11 to 37 alternate or subopposite leaflets, ovate or oblong, with rounded base and pointed tip; downy; medium-green on the upper surface, pale on the underside; 3/4 to 4 in (2-10 cm) long, 1/2 to 1 1/8 in (1.2-1.25 cm) wide.
Small, fragrant, 5-petalled flowers, yellowish-green or purplish marked with dark-purple, are borne in small, hairy panicles emerging directly from the trunk and oldest, thickest branches and some twigs, as do the clusters of curious fruits. The bilimbi is ellipsoid, obovoid or nearly cylindrical, faintly 5-sided, 1 1/2 to 4 in (4-10 cm) long; capped by a thin, star-shaped calyx at the stem-end and tipped with 5 hair-like floral remnants at the apex. The fruit is crisp when unripe, turns from bright-green to yellowish-green, ivory or nearly white when ripe and falls to the ground. The outer skin is glossy, very thin, soft and tender, and the flesh green, jelly-like, juicy and extremely acid. There may be a few (perhaps 6 or 7) flattened, disc-like seeds about 1/4 in (6 mm) wide, smooth and brown.

Perhaps a native of the Moluccas, the bilimbi is cultivated throughout Indonesia; is cultivated and semi-wild everywhere in the Philippines; is much grown in Ceylon and Burma. It is very common in Thailand, Malaya and Singapore; frequent in gardens across the plains of India, and has run wild in all the warmest areas of that country. It is much planted in Zanzibar. Introduced into Queensland about 1896, it was readily adopted and commercially distributed to growers.
In 1793, the bilimbi was carried from the island of Timor to Jamaica and, after some years, was planted in Cuba and Puerto Rico, Trinidad, the lowlands of Central America, Venezuela, Colombia, Ecuador, Surinam, Guyana and Brazil, and even in northern Argentina, and it is very popular among the Asiatic residents of those countries as it must be in Hawaii. Still it is grown only as an occasional curiosity in southern Florida.

Bilimbis are all much the same wherever they are grown, but P.J. Wester reported that a form with sweet fruits had been discovered in the Philippines.

The bilimbi is a tropical species, more sensitive to cold than the carambola, especially when very young. In Florida, it needs protection from cold and wind. Ideally, rainfall should be rather evenly distributed throughout most of the year but there should be a 2- to 3-month dry season. The bilimbi is not found in the wettest zones of Malaya. The tree makes slow growth in shady or semi-shady situations. It should be in full sun.

While the bilimbi does best in rich, moist, but well-drained soil, it grows and fruits quite well on sand or limestone.

Most efforts at grafting and budding have not been rewarding, though Wester had success in shield-budding, utilizing non-petioled, ripe, brown budwood cut 1 1/2 to 2 in (3.8-5 cm) long. Air-layering has been practiced in Indonesia for many years. However, the tree is more widely grown from seed.
Bilimbi trees are vigorous and receive no special horticultural attention. It has been suggested that they would respond well to whatever cultural treatment gives good results with the carambola.

rn In India as in Florida, the tree begins to flower about February and then blooms and fruits more or less continuously until December. The fruits are picked by hand, singly or in clusters. They need gentle handling because of the thin skin. They cannot be kept on hand for more than a few days.

Pests and Diseases
No pests or diseases have been reported specifically for the bilimbi.

The bilimbi is generally regarded as too acid for eating raw, but in Costa Rica, the green, uncooked fruits are prepared as a relish which is served with rice and beans. Sometimes it is an accompaniment for fish and meat. Ripe fruits are frequently added to curries in the Far East. They yield 44.2% juice having a pH of 4.47, and the juice is popular for making cooling beverages on the order of lemonade.
Mainly, the bilimbi is used in place of mango to make chutney, and it is much preserved. To reduce acidity, it may be first pricked and soaked in water overnight, or soaked in salted water for a shorter time; then it is boiled with much sugar to make a jam or an acid jelly. The latter, in Malaya, is added to stewed fruits that are oversweet. Half-ripe fruits are salted, set out in the sun, and pickled in brine and can be thus kept for 3 months. A quicker pickle is made by putting the fruits and salt into boiling water. This product can be kept only 4 to 5 days.
The flowers are sometimes preserved with sugar.

Fruit: Very acid bilimbis are employed to clean the blade of a kris (dagger), and they serve as mordants in the preparation of an orange dye for silk fabrics. Bilimbi juice, because of its oxalic acid content, is useful for bleaching stains from the hands and rust from white cloth, and also tarnish from brass. Wood: The wood is white, soft but tough, even-grained, and weighs 35 lbs/cu ft. It is seldom available for carpentry. Medicinal Uses: In the Philippines, the leaves are applied as a paste or poulticed on itches, swellings of mumps and rheumatism, and on skin eruptions. Elsewhere, they are applied on bites of poisonous creatures. Malayans take the leaves fresh or fermented as a treatment for venereal disease. A leaf infusion is a remedy for coughs and is taken after childbirth as a tonic. A leaf decoction is taken to relieve rectal inflammation. A flower infusion is said to be effective against coughs and thrush.
In Java, the fruits combined with pepper are eaten to cause sweating when people are feeling "under the weather". A paste of pickled bilimbis is smeared all over the body to hasten recovery after a fever. The fruit conserve is administered as a treatment for coughs, beri-beri and biliousness. A sirup prepared from the fruit is taken as a cure for fever and inflammation and to stop rectal bleeding and alleviate internal hemorrhoids.