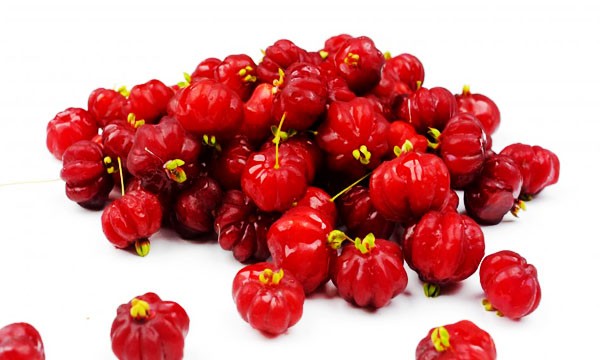 Surinam Cherry Tree Red Variety in a 3 Gallon Container. The tasty Surinam produces a 1" diameter, reddish-black cherry. This is a very unique looking cherry because of it`s pumpkin-like shape. The cherry ripens May through June. When fully ripe, it is delicious eaten fresh or in jellies. The plant is durable and can tolerate it's PH ranging from 5.5 to 7.5. It can be trimmed into a bush or small tree. Often grown as a thick hedge in central and south Florida. Easily grown in containers and makes a great edible hedge.

The shrub or tree, to 25 ft (7.5 m) high, has slender, spreading branches and resinously aromatic foliage. The opposite leaves, bronze when young, are deep-green and glossy when mature; turn red in cold, dry winter weather. They are ovate to ovate-lanceolate, blunt- to sharp-pointed, 1 1/2 to 2 1/2 in (4-6.25 cm) long. Long-stalked flowers, borne singly or as many as 4 together in the leaf axils, have 4 delicate, recurved, white petals and a tuft of 50 to 60 prominent white stamens with pale-yellow anthers. The 7- to 8-ribbed fruit, oblate, 3/4 to 1 1/2 in (2-4 cm) wide, turns from green to orange as it develops and, when mature, bright-red to deep-scarlet or dark, purplish maroon ("black") when fully ripe. The skin is thin, the flesh orange-red, melting and very juicy; acid to sweet, with a touch of resin and slight bitterness. There may be 1 fairly large, round seed or 2 or 3 smaller seeds each with a flattened side, more or less attached to the flesh by a few slender fibers.

The plant is native from Surinam, Guyana and French Guiana to southern Brazil (especially the states of Rio de Janeiro, Paraña, Santa Catharina and Rio Grande do Sul), and to northern, eastern and central Uruguay. It grows wild in thickets on the banks of the Pilcomayo River in Paraguay. It was first described botanically from a plant growing in a garden at Pisa, Italy, which is believed to have been introduced from Goa, India. Portuguese voyagers are said to have carried the seed from Brazil to India, as they did the cashew. It is cultivated and naturalized in Argentina, Venezuela and Colombia; also along the Atlantic coast of Central America; and in some islands of the West Indies–the Cayman Islands, Jamaica, St. Thomas, St. Croix, Puerto Rico, Cuba, Haiti, the Dominican Republic, and in the Bahamas and Bermuda. In 1918, Britton wrote, in the Flora of Bermuda, that ". . as it harbors the fruit fly, the tree has been largely cut out in recent years." It is frequently grown in Hawaii, Samoa, India and Ceylon as an ornamental plant and occasionally in tropical Africa, southern China and in the Philippines where it first fruited in 1911. It was long ago planted on the Mediterranean coast of Africa and the European Riviera. The first Surinam cherry was introduced into coastal Israel in 1922 and aroused considerable interest because it produced fruit in May when other fruits are scarce, and it requires so little care; but over 10 years of observation, the yields recorded were disappointingly small.
In Florida, the Surinam cherry is one of the most common hedge plants throughout the central and southern parts of the state and the Florida Keys. The fruits are today mostly eaten by children. In the past, many people allowed the tree to grow naturally and harvested the fruits for culinary use. For a while, small quantities were sold in Miami markets. In temperate zones, the plant is grown in pots for its attractive foliage and bright fruits.

There are 2 distinct types: the common bright-red and the rarer dark-crimson to nearly black, which tends to be sweeter and less resinous.

The Surinam cherry is adapted to tropical and subtropical regions. In the Philippines, it thrives from sea-level to 3,300 ft (1,000 m); in Guatemala, up to 6,000 ft (1,800 m). Young plants are damaged by temperatures below 28º F (-2.22º C), but well-established plants have suffered only superficial injury at 22º F (-5.56º C). The plant revels in full sun. It requires only moderate rainfall and, being deep-rooted, can stand a long dry season.

The Surinam cherry grows in almost any type of soil–sand, sandy loam, stiff clay, soft limestone–and can even stand waterlogging for a time, but it is intolerant of salt.

Seeds are the usual means of propagation. They remain viable for not much longer than a month and germinate in 3 to 4 weeks. Volunteer seedlings can be taken up and successfully transplanted. Layering has been successful in India. The seedlings can be topworked to superior selections by side- or cleft-grafting but they tend to sucker below the graft.

Surinam cherry seedlings grow slowly; some begin to fruit when 2 years old; some may delay fruiting for 5 or 6 years, or even 10 if in unfavorable situations. They are most productive if unpruned, but still produce a great many fruits when close-clipped in hedges. Quarterly feeding with a complete fertilizer formula promotes fruiting. The plant responds quickly to irrigation, the fruit rapidly becoming larger and sweeter in flavor after a good watering.

The fruits develop and ripen quickly, only 3 weeks after the flowers open. In Brazil, the plants bloom in September and fruits ripen in October; they bloom again in December and January. In Florida and the Bahamas, there is a spring crop, March or April through May or June; and a second crop, September through November, coinciding with the spring and fall rains.
The fruits should be picked only when they are so ripe as to fall into the hand at the lightest touch, otherwise they will be undesirably resinous. Gathering must be done daily or even twice a day.

Surinam cherries are highly attractive to Caribbean and Mediterranean fruit flies, but the incidence of infestation was found to vary greatly in Israel from location to location, some plants being unmolested.
The foliage is occasionally attacked by scale insects and caterpillars. A large, extensive hedge along a canal in Dade County blew down in September 1982. Examination showed that the roots had been chewed off and there were about a dozen white grubs up to 2 in (5 cm) long under each plant. These were identified as the larvae of a sugar cane pest that is common in Haiti.
Among diseases encountered in Florida are leaf spot caused by Cercospora eugeniae, Helminthosporium sp., and Phyllostica eugeniae; thread blight from infection by Corticium stevensii; anthracnose from Colletotrichum gloeosporioides; twig dieback and root rot caused by Rhizoctonia solani; and mushroom root rot, Armillariella (Clitocybe) tabescens.

Children enjoy the ripe fruits out-of-hand. For table use, they are best slit vertically on one side, spread open to release the seed(s), and kept chilled for 2 or 3 hours to dispel most of their resinously aromatic character. If seeded and sprinkled with sugar before placing in the refrigerator, they will become mild and sweet and will exude much juice and serve very well instead of strawberries on shortcake and topped with whipped cream. They are an excellent addition to fruit cups, salads and custard pudding; also ice cream; and can be made into pie or sauce or preserved whole in sirup. They are often made into jam, jelly, relish or pickles. Brazilians ferment the juice into vinegar or wine, and sometimes prepare a distilled liquor.
Food Value Per 100 g of Edible Portion*

The seeds are extremely resinous and should not be eaten. Diarrhea has occurred in dogs that have been fed the whole fruits by children. The strong, spicy emanation from bushes being pruned irritates the respiratory passages of sensitive persons.

The leaves have been spread over the floors of Brazilian homes. When walked upon, they release their pungent oil which repels flies. The bark contains 20 to 28.5% tannin and can be used for treating leather. The flowers are a rich source of pollen for honeybees but yield little or no nectar.

In Brazil the leaf infusion is taken as a stomachic, febrifuge and astringent. In Surinam, the leaf decoction is drunk as a cold remedy and, in combination with lemongrass, as a febrifuge. The leaves yield essential oil containing citronellal, geranyl acetate, geraniol, cineole, terpinene, sesquiterpenes and polyterpenes.