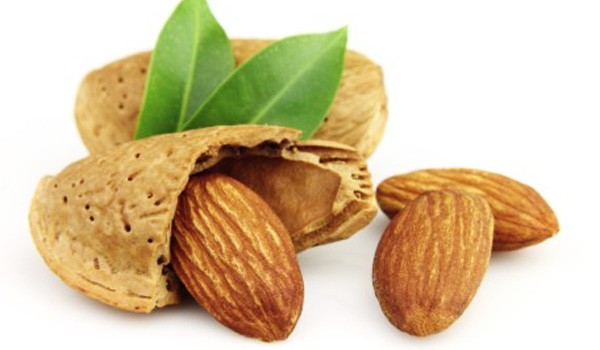 Almond Tree in a 3 Gallon Container. The almond tree is a small to medium sized tree with a spreading, open canopy, about 10-15 feet across. Almond trees produce fruit which is commonly referred to as a nut, though it is technically a drupe similar to a cherry. Unlike true nuts, almonds develop a leatherly flesh outside of the shell, which is usually discarded. The U.S. produces more almonds than any other country. Almonds are high in protein, low in carbohydrates and contain many essential vitamins and minerals.

The tree has a pyramidal or rounded crown; is generally about 33 ft (10 m) high but may reach 115 ft (35 m) in favorable situations. A gummy latex, white or reddish, exudes from wounds in the bark. The leaves are alternate and highly variable; may be ovate-oblong, obovate or elliptic; 4 to 8 in (10-20 cm) long, 1 1/4 to 2 3/8 in (3-6 cm) wide; short-pointed at the apex, sometimes long-tapering at the base; smooth or with a few scattered hairs. The flowers, borne singly or in groups of 2 to 5 in the leaf axils, are cylindrical, 4- to 5-lobed, white or greenish; 1/6 to 1/3 in (4-8 mm) long. The fruit, downy when young, is ovoid, elliptical or round; 1 1/2 to 4 in (4-10 cm) long, sometimes having a short nipple at the apex; with smooth, tough, pale-yellow skin when ripe and fragrant, white, mucilaginous, translucent, mild-flavored, sweet or insipid pulp containing 1 to 4 oblong seeds, brown, with a pale hilum on one side. Until fully ripe, the fruit is permeated with latex and is very gummy and astringent.

The abiu is a denizen of the headwaters of the Amazon. It grows wild on the lower eastern slopes of the Andes from southwestern Venezuela to Peru. It is often cultivated around Iquitos, Peru. In Ecuador, it is common in the Province of Guayas and the fruits are sold in the markets of Guayaquil. It is much grown around Pará, Brazil; less frequently near Rio de Janeiro, and to a limited extent at Bahia. In Colombia, it is fairly common in the regions of Caquetá, Meta and Vaupés and it abounds in the adjacent areas of Amazonas, Venezuela. It has been growing for many years in Trinidad. The plant explorers, Dorsett, Shamel and Popenoe, collected seeds for the United States Department of Agriculture in Bahia in 1914 (S.P.I. #37929). In 1915, seeds were received from Lavoras, Minas, Brazil (S.P.I. #41003).

There is much variation in the form, size and quality of the fruits of seedling trees, some having firm flesh, some soft; and some are insipid, while others have agreeable flavor. At Puerto Ospina, along the Putamayo River in Colombia, there is a type that fruits in 4 years. The fruit is round and large. Near the River Inirida, in Vaupés, Colombia, there is a type that bears in one year from seed, but the fruits are small with little pulp.

The abiu is strictly tropical or near-tropical. It thrives best in a year-around warm and moist climate, yet Popenoe noted that it does well in somewhat cooler Rio de Janeiro. In Peru it has not been found above 2,000 ft (650 m), though in Colombia, it can be grown up to an elevation of 6,000 ft (1,900 m).

rnThe tree is naturally suited to fertile, wet soil. It is subject to chlorosis in the limestone of southern Florida.

The fruits are in season in March and April in Ecuador. They are sold in some Brazilian markets from September to April but only a few are seen in the much shorter season of February and March at Bahia. Fruits have matured in October in Florida. The abiu can be picked while underripe and firm for transport to markets.

In Colombia, people who wish to eat the abiu. are advised to grease their lips beforehand to keep the gummy latex from clinging to them. It is mostly eaten out-of-hand but, in Pará, some types are used to make ices and ice cream..

Wood: The wood is dense and heavy, hard, and valued for construction.

In Brazil, the pulp, because of its mucilaginous nature, is eaten to relieve coughs, bronchitis and other pulmonary complaints. The latex is given as a vermifuge and purge and is applied on abscesses.