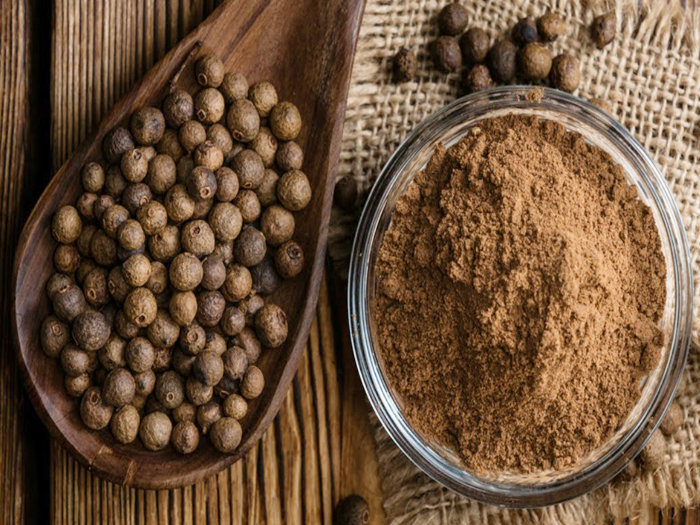 All Spice Tree in a 3 Gallon Container. Allspice is an extremely versatile tree, it's flavor is similiar to a mix of cinnamon, clove and nutmeg. The berries are ground and used to flavor meats, pickles and soups. The leaves which have a rich/strong aroma is also used as a rub to flavor meats, teas and other culinary uses. Oils extracted are also used in flavoring and pefumery. In certain part of the world Allspice leaves are placed throught the floor of the chapel when couples are being married, and as the guest trample on the leaves, the entire chapel is consumed by the strong pefume scent of Allspice.

Allspice is the dried, unripe berries of a large evergreen tree, native to the Caribbean area. The leaves are large and leathery, about 8 inches long by 2 inches wide. The fruits are about 0.33 inch diameter, near globose, produced in clusters of a dozen or more at or near the terminals of branches. The fruit is harvested while immature, as it is then most strongly flavored. It is a drupe, with 1 or 2 seeds. The whole dried fruit is ground to produce the allspice powder of commerce. Both pulp and seeds are aromatic, and contain an oil with qualities similar to clove oil.

The name "allspice" is due to the fact that it's flavor resembles a combination of cinnamon, clove and nutmeg. It is often used in pumpkin pie. Culinary uses include as flavoring for sauces, pickles, sausages and soups. Extracted oil is used for flavoring and perfumery. The wood is used for canes, umbrella handles, and to add flavor to barbecue.

Allspice is native to the West Indies, southern Mexico and Central America. It was "discovered" in Mexico by 16th century Spanish explorers who called it "pimienta", confusing it with black pepper. (Those traveling Spaniards were so intent on finding a new source of black pepper, that they also confused the New World chilis with that precious East Indian spice.) Nowadays allspice is grown commercially in Mexico, Honduras, Trinidad, Cuba, and especially in Jamaica, which practically has a monopoly. It is the only spice whose commercial production is entirely confined to the New World.

A small to medium sized tree to 40ft, needing near-tropical conditions to survive. Mature trees will stand only short periods of light frost, to 26F. Allspice makes an excellent container plant for indoor or greenhouse culture.

This is a slow growing, beautiful little tree and well worth growing in a container on a patio or, in tropical climates, in a shrub border. It may not flower and fruit outside its native range, but the big glossy aromatic leaves are an attraction. Allspice, the spice, is a brown powder that smells like cloves, cinnamon and nutmeg. Allspice is used in pickles, ketchup and marinades, and to flavor pumpkin pies, cakes and candies. An oil pressed from the fruits is used in perfumes and cosmetics. The liqueurs, Benedictine and Chartreuse, contain allspice flavoring. Northern Europeans use allspice in sausages and pickled fish.

The principal essential oil in allspice is eugenol, the same as found in cloves. Eugenol is used as an anesthetic for tooth aches and as a digestive aid.

The fruits contain 2 to 5% essential oil (the exact content depends much on the time of harvest). As main components, eugenol, eugenol methyl ether, and terpenes (myrcene, 1,8-cineol and a-phellandrene) have been reported. In allspice fruits from Jamaica, eugenol (65% to 90%) is the main constituent; methyl eugenol is found in minor (10%) and myrcene in trace amounts (1%). Allspice from México is dominated by methyl eugenol (50 to 60%) with smaller amounts of myrcene (15%) and eugenol (10%). The leaves contain less essential oil, but the content is high enough to make distillation profitable. In composition, it is similar to the essential oil from the fruits.