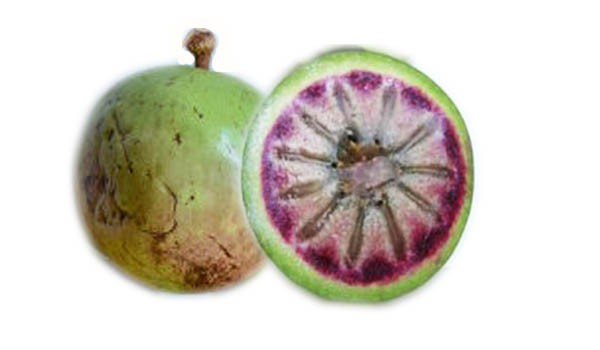 Caimito/Star Apple Tree Green Variety Grafted in a 3 Gallon Container. This beautiful shade tree has glossy dark green leaves with a silky bronze color underneath. Caimito is a favorite in the Caribbean and Central America as well as Southeast Asia. The fruit has a mild grape-like flavor, and is best eaten fresh.

One of the relatively minor fruits of the family Sapotaceae, the star apple or goldenleaf tree, Chrysophyllum cainito L. (syn. Achras caimito Ruiz & Pavon), has acquired a moderate assortment of regional names. In Spanish, it is usually caimito or estrella; in Portuguese, cainito or ajara; in French, generally, caimite or caimitier; in Haiti, pied caimite or caimitier a feuilles d'or; in the French West Indies, pomme surette, or buis; in the Virgin Islands, cainit; in Trinidad and Tobago, it is caimite or kaimit; in Barbados, star-plum; in Colombia, it may be caimo, caimo morado (purple variety) or caimito maduraverde (green variety); in Bolivia, caimitero, or murucuja; in Surinam, sterappel, apra or goudblad boom; in French Guiana, macoucou; in Belize, damsel; in El Salvador, guayabillo; in Argentina, aguay or olivoa. The Chinese in Singapore call it "chicle durian".

The star apple tree is erect, 25 to 100 ft (8-30 m) tall, with a short trunk to 3 ft (1 m) thick, and a dense, broad crown, brown-hairy branchlets, and white, gummy latex. The alternate, nearly evergreen, leaves are elliptic or oblong-elliptic, 2 to 6 in (5-15 cm) long, slightly leathery, rich green and glossy on the upper surface, coated with silky, golden-brown pubescence beneath when mature, though silvery when young. Small, inconspicuous flowers, clustered in the leaf axils, are greenish-yellow, yellow, or purplish-white with tubular, 5-lobed corolla and 5 or 6 sepals. The fruit, round, oblate, ellipsoid or somewhat pear-shaped, 2 to 4 in (5-10 cm) in diameter, may be red-purple, dark-purple, or pale-green. It feels in the hand like a rubber ball. The glossy, smooth, thin, leathery skin adheres tightly to the inner rind which, in purple fruits, is dark-purple and 1/4 to 1/2 in (6-12.5 mm) thick; in green fruits, white and 1/8 to 3/16 in.(3-5 mm) thick. Both have soft, white, milky, sweet pulp surrounding the 6 to 11 gelatinous, somewhat rubbery, seed cells in the center which, when cut through transversely, are seen to radiate from the central core like an asterisk or many-pointed star, giving the fruit its common English name. The fruit may have up to 10 flattened, nearly oval, pointed, hard seeds, 3/4 in (2 cm.) long, nearly 1/2 in (1.25 cm) wide, and up to 1/4 in (6 mm) thick, but usually several of the cells are not occupied and the best fruits have as few as 3 seeds. They appear black at first, with a light area on the ventral side, but they dry to a light-brown.

It is commonly stated that the star apple is indigenous to Central America but the eminent botanists Paul Standley and Louis Williams have declared that it is not native to that area, no Nahuatl name has been found, and the tree may properly belong to the West Indies. However, it is more or less naturalized at low and medium altitudes from southern Mexico to Panama, is especially abundant on the Pacific side of Guatemala, and frequently cultivated as far south as northern Argentina and Peru. It was recorded by Ciezo de Leon as growing in Peru during his travels between 1532 and 1550. It is common throughout most of the Caribbean Islands and in Bermuda. In Haiti, the star apple was the favorite fruit of King Christophe and he held court under the shade of a very large specimen at Milot. The United States Department of Agriculture received seeds from Jamaica in 1904 (S.P.I. #17093). The star apple is grown occasionally in southern Florida and in Hawaii where it was introduced before 1901. There are some trees in Samoa and in Malaya though they do not bear regularly. The tree is grown in southern Vietnam and in Kampuchea for its fruits but more for its ornamental value in West Tropical Africa, Zanzibar, and the warmer parts of India. It was introduced into Ceylon in 1802, reached the Philippines much later but has become very common there as a roadside tree and the fruit is appreciated.

Apart from the two distinct color types, there is little evidence of such pronounced variation that growers would be stimulated to make vigorous efforts to select and propagate superior clones. William Whitman of Miami observed a tree yielding heavy crops of well-formed, high quality fruits in Port-au-Prince, Haiti, from late January to the end of June. He brought budwood to Florida in 1953. Grafted progeny and trees grown from air-layers have borne well here even prior to reaching 10 ft (3 m) in height. This introduction, named the "Haitian Star Apple", is propagated commercially for dooryard culture.

Climate
The star apple tree is a tropical or near-tropical species ranging only up to 1,400 ft (425 m) elevation in Jamaica. It does well only in the warmest locations of southern Florida and on the Florida Keys. Mature trees are seriously injured by temperatures below 28º F (-2.22º C) and recover slowly. Young trees may be killed by even short exposure to 31º F (-0.56º C).

The tree is not particular as to soil, growing well in deep, rich earth, clayey loam, sand, or limestone, but it needs perfect drainage.

Star apple trees are most widely grown from seeds which retain viability for several months and germinate readily. The seedlings bear in 5 to 10 years. Vegetative propagation hastens production and should be more commonly practiced. Cuttings of mature wood root well. Air-layers can be produced in 4 to 7 months and bear early. Budded or grafted trees have been known to fruit one year after being set in the ground. In India, the star apple is sometimes inarched on star apple seedlings. Grafting on the related satinleaf tree (C. oliviforme L.) has had the effect of slowing and stunting the growth.

During the first 6 months, the young trees should be watered weekly. Later irrigation may be infrequent except during the flowering season when watering will increase fruit-set. Most star apple trees in tropical America and the West Indies are never fertilized but a complete, well-balanced fertilizer will greatly improve performance in limestone and other infertile soils.

Star apples are generally in season from late winter or early spring to early summer. They do not fall when ripe but must be hand-picked by clipping the stem. Care must be taken to make sure that they are fully mature. Otherwise the fruits will be gummy, astringent and inedible. When fully ripe, the skin is dull, a trifle wrinkled, and the fruit is slightly soft to the touch.

In India, a mature star apple tree may bear 150 lbs (60 kg) of fruits in the short fruiting season of February and March.

Larvae of small insects are sometimes found in the ripe fruits. The, main disease problem in the Philippines is stem-end decay caused by species of Pestalotia and Diplodia. In Florida, some fruits may mummify before they are full-grown. The foliage is subject to leaf spots from attack by Phomopsis sp., Phyllosticta sp., and Cephaleuros virescens, the latter known as algal leaf spot or green scurf. Birds and squirrels attack the fruits if they are left to fully ripen on the tree.

Star apples must not be bitten into. The skin and rind (constituting approximately 33% of the total) are inedible. When opening a star apple, one should not allow any of the bitter latex of the skin to contact the edible flesh. The ripe fruit, preferably chilled, may be merely cut in half and the flesh spooned out, leaving the seed cells and core. A combination of the chopped flesh with that of mango, citrus, pineapple, other fruits and coconut water is frozen and served as Jamaica Fruit Salad Ice. An attractive way to serve the fruit is to cut around the middle completely through the rind and then, holding the fruit stem-end down, twisting the top gently back and forth. As this is done, the flesh will be felt to free itself from the downward half of the rind, and the latter will pull away, taking with it the greater part of the core. In Jamaica, the flesh is often eaten with sour orange juice, a combination called "matrimony"; or it is mixed with orange juice, a little sugar, grated nutmeg and a spoonful of sherry and eaten as dessert called "strawberries and-cream". Bolivians parboil the edible portion, and also prepare it as a decoction. An emulsion of the slightly bitter seed kernels is used to make imitation milk-of almonds, also nougats and other confections.

Wood: The tree is seldom felled for timber unless there is a particular need for it. The heartwood is pinkish or red-brown, violet, or dark-purple; fine-grained, compact, heavy, hard, strong, tough but not difficult to work; durable indoors but not outside in humid conditions. It has been utilized for heavy construction and for deluxe furniture, cabinetwork and balustrades.
Latex: The latex obtained by making incisions in the bark coagulates readily and has been utilized as an adulterant of gutta percha. It was formerly proposed as a substitute for wax on the shelves of wardrobes and closets.

The ripe fruit, because of its mucilaginous character, is eaten to sooth inflammation in laryngitis and pneumonia. It is given as a treatment for diabetes mellitus, and as a decoction is gargled to relieve angina. In Venezuela, the slightly unripe fruits are eaten to overcome intestinal disturbances. In excess, they cause constipation. A decoction of the rind, or of the leaves, is taken as a pectoral. A decoction of the tannin-rich, astringent bark is drunk as a tonic and stimulant, and is taken to halt diarrhea, dysentery and hemorrhages, and as a treatment for gonorrhea and "catarrh of the bladder". The bitter, pulverized seed is taken as a tonic, diuretic and febrifuge. Cuban residents in Miami are known to seek the leaves in order to administer the decoction as a cancer remedy. Many high-tannin plant materials are believed by Latin Americans to be carcinostatic. In Brazil, the latex of the tree is applied on abscesses and, when dried and powdered, is given as a potent vermifuge. Else where, it is taken as a diuretic, febrifuge and remedy for dysentery.