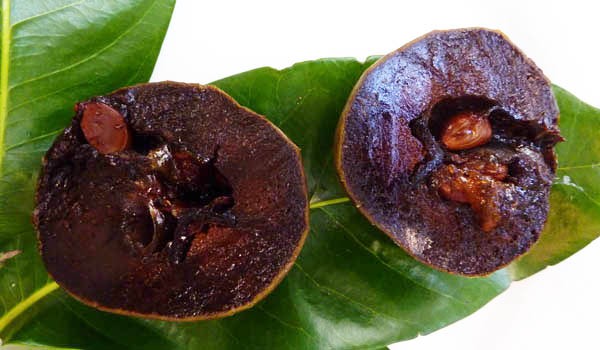 Black Sapote Tree in a 3 Gallon Container. Often called Chocolate pudding fruit, the black sapote is an evergreen, handsome tree with dark green, glossy leaves. Fruit are greenish-brown when ripe having a thin skin and chocolate colored pulp. A spoonful of honey mixed into the pulp makes it glossy, shiny and tasty, living up to its popular name of Chocolate Pudding Fruit. They can be grown in containers and will reach heights of 10-12 feet.

The black sapote is not, as might be assumed, allied to either the sapote (Pouteria sapota H.E. Moore & Stearn) or the white sapote (Casimiroa edulis Llave & Lex.). Instead, it is closely related to the persimmon in the family Ebenaceae. For many years it has been widely misidentified as Diospyros ebenaster Retz., a name confusingly applied also to a strictly wild species of the West Indies now distinguished as D. revoluta Poir. The presently accepted binomial for the black sapote is D. digyna Jacq. (syn. D. obtusifolia Humb. & Bonpl. ex Willd.). In Spanish, it is known variously as sapote, sapote negro, zapote, zapote negro, zapote prieto, zapote de mico, matasano (or matazano) de mico, or ebano. It has been called black persimmon in Hawaii.

The tree is handsome, broad-topped, slow-growing, to 80 ft (25 m) in height, with furrowed trunk to 30 in (75 cm) in diameter, and black bark. The evergreen, alternate leaves, elliptic-oblong to oblong-lanceolate, tapered at both ends or rounded at the base and bluntly acute at the apex, are leathery, glossy, 4 to 12 in (10-30 cm) long. The flowers, borne singly or in groups of 3 to 7 in the leaf axils, are tubular, lobed, white, 3/8 to 5/8 in (1-1.6 cm) wide, with persistent green calyx. Some have both male and female organs, large calyx lobes and are faintly fragrant; others are solely male and have a pronounced gardenia-like scent and a few black specks in the throat of the corolla. The fruit is bright-green and shiny at first; oblate or nearly round; 2 to 5 in (5-12.5 cm) wide; with a prominent, 4-lobed, undulate calyx, 1 1/2 to 2 in (4-5 cm) across, clasping the base. On ripening, the smooth, thin skin becomes olive-green and then rather muddy-green. Within is a mass of glossy, brown to very dark-brown, almost black, somewhat jelly-like pulp, soft, sweet and mild in flavor. In the center, there may be 1 to 10 flat, smooth, brown seeds, 3/4 to 1 in (2-2.5 cm) long, but the fruits are often seedless.

The black sapote is native along both coasts of Mexico from Jalisco to Chiapas, Veracruz and Yucatan and in the forested lowlands of Central America, and it is frequently cultivated throughout this range. It was apparently carried by the Spaniards to Amboina before 1692, and to the Philippines long before 1776, and eventually reached Malacca, Mauritius, Hawaii, Brazil, Cuba, Puerto Rico and the Dominican Republic. In 1919, seeds from Guadalajara, Mexico, were sent to the Bureau of Plant Industry of the United States Department of Agriculture; cuttings and seeds were received from the Isle of Pines, Cuba, in 1915; seeds arrived from Hawaii in 1916 and 1917; others from Oaxaca, Mexico, in 1920. Numerous seedlings have been grown in southern California but all have been killed by low temperatures. The tree does very well in southern Florida, though it has been grown mainly as a curiosity. Outside of its homeland, the fruit has not achieved any great popularity. In Mexico, the fruits are regularly marketed.

Certain trees tend to bear very large, seedless or nearly seedless fruits maturing in summer instead of winter as most do, but no varietal names have been attached to them in Florida.

The tree has a broad adaptability as to terrain. In Mexico it grows naturally in dry forests or on alluvial clay near streams or lagoons where it is frequently subject to flooding. Nevertheless, it thrives on moist sandy loam, on well-drained sand or oolitic limestone with very little top-soil in southern Florida. It is said to flourish on all the soils of Cuba.

The black sapote is usually grown from seeds, which remain viable for several months in dry storage and germinate in about 30 days after planting in flats. Vegetative propagation is not commonly practiced but the tree has been successfully air-layered and also shield-budded using mature scions.

Seedlings are best transplanted to pots when about 3 in (7.5 cm) high and they are set in the field when 1 to 2 years old, at which time they are 1 to 2 ft (30-60 cm) in height. They should be spaced at least 40 ft (12 m) apart. Most begin to bear in 5 to 6 years but some trees may take somewhat longer. The tree is naturally vigorous and receives little or no cultural attention in Florida though it has been noted that it benefits from fertilization.

In Mexico, the fruits are common in the markets from August to January. Most black sapotes in Florida ripen in December, January or February. Certain trees, especially the large-fruited types, regularly come into season in June, others in July and August.

It is difficult to detect the slight color change of mature fruits amid the dense foliage of the black sapote tree. Many black sapotes ripen, fall and smash on the ground before one has the chance to pick them, and this is one reason why .the tree is not favored for landscaping in urban areas. An experienced picker can harvest the fruits at the green-mature or olive-green stage with a cutting pole equipped with a cloth sack.

No yield figures are available but the tree is noted for bearing well. In 1899, the annual crop in Mexico was valued at $27,000, a considerable sum at that time.

Fruits picked when full-grown but unripe (bright-green) have ripened in 10 days at room temperature. Therefore it is at this stage that they must be picked for marketing and shipping. Firm, olive-green fruits will ripen in 2 to 6 days. Fruits displayed on markets in Mexico are somewhat shriveled and wrinkled. The black sapote is very soft when fully ripe. Though it may remain fit for eating if held for a few days in cold storage, it is too soft to stand handling.

Unkind writers have employed unflattering phrases in describing the flesh of the black sapote and have probably hindered its acceptance. This seems quite unreasonable because the color and texture of the pulp closely match stewed prunes, to which there seems to be no aesthetic objection. In the Philippines, the seeded pulp is served as dessert with a little milk or orange juice poured over it. The addition of lemon or lime juice makes the pulp desirable as a filling for pies and other pastry. It is also made into ice cream. In Mexico, the pulp may be mashed, beaten or passed through a colander and mixed with orange juice or brandy, and then served with or without whipped cream. Also, they sometimes mix the pulp with wine, cinnamon and sugar and serve as dessert. Some Floridians use an eggbeater to blend the pulp with milk and ground nutmeg. A foamy, delicious beverage is made by mixing the pulp with canned pineapple juice in an electric blender. In Central America, the fermented fruits are made into a liqueur somewhat like brandy.

Unripe black sapotes are very astringent, irritant, caustic and bitter, and have been used as fish poison in the Philippines.

Wood: The wood is yellowish to deep-yellow with black markings near the heart of old trunks; compact and suitable for cabinetwork but little used. Reports of dark wood utilized for furniture are probably the result of confusion with other species of Diospyros.

The crushed bark and leaves are applied as a blistering poultice in the Philippines. In Yucatan, the leaf decoction is employed as an astringent and is taken internally as a febrifuge. Various preparations are used against leprosy, ringworm and itching skin conditions.