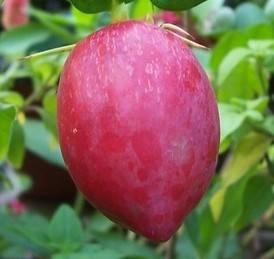 Natal Plum in a 3 Gallon Container. Natal plums are among the best ocean front foundation, hedge, container and groundcover plants for tropical and subtropical regions. They are very popular in South Florida. Natal plums are often grown in containers on ocean front condominium balconies. Their thick leathery leaves are not torn by wind nor bothered by salt spray. Natal plum is native to the Northern South African province of KwaZulu/Natal. It is a popular hedge plant, widely cultivated in the New and Old World tropics. Natal plum is the perfect hedge plant. Its dense foliage makes it a good screen, and its thorns make it an effective barrier as well. Add on the deliciously fragrant blossoms and edible fruits, and it′s hard to think of a better shrub for the tropical garden.


Two species of the notorious family Apocynaceae are noteworthy because of their edible fruits and innocuous milky latex. The more attractive of these is the carissa, Carissa macrocarpa A. DC. (syn. C. grandiflora A. DC.), also called Natal plum and amantungula.


A vigorous, spreading, woody shrub with abundant white, gummy sap, the carissa may reach a height of 15 to 18 ft (4.5-5.5 m) and an equal breadth. The branches are armed with formidable stout, double-pronged thorns to 2 in (5 cm) long. The handsome, evergreen, opposite leaves are broad-ovate, 1 to 2 in (2.5-5 cm) long, dark-green, glossy, leathery. Sweetly fragrant, white, 5-lobed, tubular flowers to 2 in (5 cm) broad are borne singly or a few together at the tips of branchlets all year. Some plants bear flowers that are functionally male, larger than normal and with larger anthers, and stamens much longer than the style. Functionally female flowers have stamens the same length as the style and small anthers without pollen.

The round, oval or oblong fruit, to 2 1/2 in (6.25 cm) long and up to 1 1/2 in (4 cm) across, is green and rich in latex when unripe. As it ripens, the tender, smooth skin turns to a bright magenta-red coated with a thin, whitish bloom, and finally dark-crimson. The flesh is tender, very juicy, strawberry-colored and -flavored, with flecks of milky sap. Massed in the center are 6 to 16 small, thin, flat, brown seeds, not objectionable when eaten.

The carissa is native to the coastal region of Natal, South Africa, and is cultivated far inland in the Transvaal. It was first introduced into the United States in 1886 by the horticulturist Theodore L. Meade. Then, in 1903, Dr. David Fairchild, heading the Office of Foreign Seed and Plant Introduction of the United States Department of Agriculture, brought in from the Botanical Garden at Durban, a large quantity of seeds. Several thousand seedlings were raised at the then Plant Introduction Garden at Miami and distributed for testing in Florida, the Gulf States and California, and much effort was devoted to following up on the fate of the plants in different climatic zones. The carissa was introduced into Hawaii in 1905 and over the next few years was extensively distributed throughout the islands. It was planted in the Bahamas in 1913. It first fruited in the Philippines in 1924; is grown to a limited extent in India and East Africa. It was widely planted in Israel, flourished and flowered freely but rarely set fruit. Elsewhere, it is valued mainly as a protective hedge and the fruit is a more-or-less-welcomed by-product.

The carissa is subtropical to near-tropical, thriving throughout the state of Florida and enduring temperatures as low as 25º F (-3.89º C) when well-established. Young plants need protection when the temperature drops below 29º F (-1.67º C). Best growth is obtained in full sun.

The shrub thrives in dry, rocky terrain in Hawaii; in red clay or sandy loam in California, and in sandy or alkaline soils in Florida, though the latter may induce deficiencies in trace elements. The plant has moderate drought tolerance and high resistance to soil salinity and salt spray. It cannot stand water-logging.

Seeds germinate in 2 weeks but the seedlings grow very slowly at first and are highly variable. Vegetative propagation is preferred and can be done easily by air-layering, ground-layering, or shield-budding. Cuttings root poorly unless the tip of a young branchlet is cut half-way through and left attached to the plant for 2 months. After removal and planting in sand, it will root in about 30 days. Grafting onto seedlings of the karanda (q.v.) has considerably increased fruit yield.

Seedlings may begin to produce fruit in 2 years; cuttings earlier. A standard, well-balanced fertilizer suffices except on limestone where trace elements must be added. Dwarf cultivars must be kept under control, otherwise they are apt to revert to the ordinary type. Vigorous shoots will develop and outgrow the compact form.

In its homeland, the carissa is pollinated by small beetles and hawk-moths and other night-flying insects. Various degrees of unfruitfulness in America has been attributed to inadequate pollination. Some seedlings are light-croppers, but others never bear at all. It has been found that unproductive plants, apparently self-infertile, will bear fruits after cross-pollination by hand.

While the carissa flowers and fruits all year, the peak period for blooming and fruiting is May through September. The 5-pointed calyx remains attached to the plant when the fruit is picked.


Spider mites, thrips and whiteflies, and occasionally scale insects, attack young plants, especially in nurseries and in the shade.


The carissa must be fully ripe, dark-red and slightly soft to the touch to be eaten raw. It is enjoyed whole, without peeling or seeding, out-of-hand. Halved or quartered and seeded it is suitable for fruit salads, adding to gelatins and using as topping for cakes, puddings and ice cream. Carissas can be cooked to a sauce or used in pies and tarts. Stewing or boiling causes the latex to leave the fruit and adhere to the pot (which must not be aluminum), but this can be easily removed by rubbing with cooking oil.

Carissas are preserved whole by pricking, cooking briefly in a sugar sirup and sterilizing in jars. Peeled or unpeeled, they are made into jam, other preserves, sirup or sweet pickles. Jelly is made from slightly underripe fruits, or a combination of ripe and unripe to enhance the color.