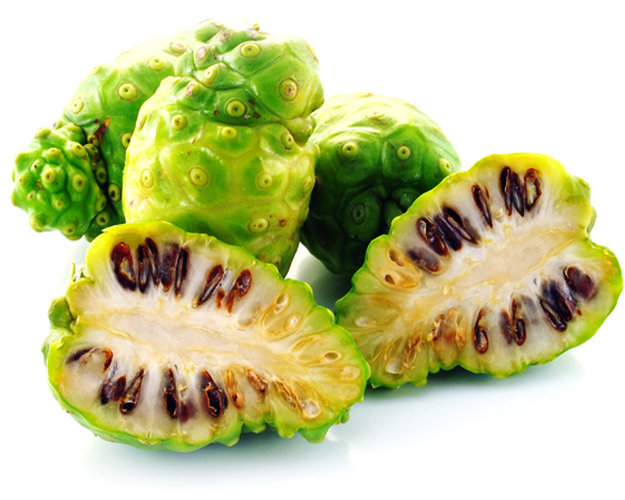 Noni Tree in a 3 Gallon Container. Noni is a medicinal fruit that is professed to combat nearly every ailment of the body from cancer to allergies. Most notable is the fruit’s detoxifying juice which lowers blood pressure, regulates menstruation, and wards off infection. There are literally hundreds of scientific studies and testimonials published on various websites that tout the fruits healing powers. They can be container grown or planted as a specimen, and the trees begin fruiting at just one year of age. Great value since the tree fruits year round, one tree can provide a steady supply of noni, and noni juice can cost upwards of $20 per bottle. Also can be grown virtually anywhere in a container so can be enjoyed even in cold climates.

Morinda citrifolia, commonly known as Great morinda, Indian mulberry, Beach mulberry, Tahitian Noni, or since recently: Noni (from Hawaiian), Nono (in Tahitian), Mengkudu (from Malay), Nonu (in Tongan), and Ach (in Hindi), is a shrub or small tree in the family Rubiaceae. Morinda citrifolia is native to Southeast Asia but has been extensively spread by man throughout India and into the Pacific islands as far as the islands of French Polynesia, of which Tahiti is the most prominent. It can also be found in parts of the West Indies. Flowers and unripe and ripe fruit of Morinda citrifoliaNoni grows in shady forests as well as on open rocky or sandy shores. It reaches maturity in about 18 months and then yields between 4-8 kg of fruit every month throughout the year. It is tolerant of saline soils, drought conditions, and secondary soils. It is therefore found in a wide variety of habitats: volcanic terrains, lava-strewn coasts, and clearings or limestone outcrops. It can grow up to 9 m tall, and has large, simple, dark green, shiny and deeply veined leaves. The richest of the soils in which noni grows are found in French Polynesia. The plant flowers and fruits all year round. The flowers are small and white. The fruit is a multiple fruit that has a pungent odor when ripening, and is hence also known as cheese fruit or even vomit fruit. It is oval and reaches 4-7 cm in size. At first green, the fruit turns yellow then almost white as it ripens. It contains many seeds. It is sometimes called starvation fruit. Despite its strong smell and bitter taste, the fruit is nevertheless eaten as a famine food and, in some Pacific islands, even a staple food, either raw or cooked. Southeast Asians and Australian Aborigines consume the fruit raw with salt or cook it with curry. The seeds are edible when roasted. The noni is especially attractive to weaver ants, which make nests out of the leaves of the tree. These ants protect the plant from some plant-parasitic insects. The smell of the fruit also attracts fruit bats, which aid in dispersing the seeds.

In China, Samoa, Japan, and Tahiti, various parts of the tree (leaves, flowers, fruits, bark, roots) serve as tonics and to contain fever, to treat eye and skin problems, gum and throat problems as well as constipation, stomach pain, or respiratory difficulties. In Malaysia, heated noni leaves applied to the chest are believed to relieve coughs, nausea, or colic. The noni fruit is taken, in Indochina especially, for asthma, lumbago, and dysentery. As for external uses, unripe fruits can be pounded, then mixed with salt and applied to cut or broken bones. In Hawaii, ripe fruits are applied to draw out pus from an infected boil. The green fruit, leaves and the root/rhizome have traditionally been used to treat menstrual cramps and irregularities, among other symptoms, while the root has also been used to treat urinary difficulties.The bark of the great morinda produces a brownish-purplish dye for batik making; on the Indonesian island of Java, the trees are cultivated for this purpose. In Hawaii, yellowish dye is extracted from its root in order to dye cloth. In Surinam and different other countries, the tree serves as a wind-break, as support for vines and as shade trees for coffee bushes. The fruit is used as a shampoo in Malaysia, where it is said to be helpful against head lice. There have been recent applications also for the use the oil from noni seeds. The noni seed oil is abundant in linoleic acid, found in products in the beauty industry, as research points to its affective properties when applied topically on the skin, ie. anti-inflammatory, acne reduction, moisture retention properties.Scientific studies have investigated noni's effect on the growth of cancerous tissue.One such study found that noni inhibited and reduced growth of the capillary vessels sprouting from human breast tumor explants and, at increased concentrations, the noni caused existing vessels to rapidly degenerate. Another scientific study showed one brand of noni juice to have prevented formation of cancer cells in rats (using detection methods of bio-chemical markers called DNA adducts). It further showed to reduce the number of DNA adducts in rats induced with carcinogenic DMBA, in some cases, by up to 90%. The same study then also looked at the effective anti-oxidant properties of this Tahitian Noni brand of noni juice, (via LPO and TNB-SAR assays) comparing with the free-radical properties of vitamin C, grape seed powder (GSP), and pycnogenol (PYC) at the daily dose per serving level recommended by U.S. RDAs or manufacturers. This noni juice brand was shown to be more effective than all three. Their conclusion: "The results suggest that prevention of carcinogen-DNA adduct formation and the antioxidant activity of TNJ may contribute to the cancer preventive effect of Morinda citrifolia. Wild noni growing in Kuliouou Valley, Hawaii

The Noni Juice Market Noni powder, sold in capsule form was the first noni product brought to the commercial market in Hawaii by Herbert Moniz of Herb's Herbs in 1992 after patenting a unique noni dehydrating method. (US patent 5288491) In 1995, David Marcus, of Hawaiian Herbal Blessings Inc., began marketing the first traditionally fermented noni juice from Maui, Hawaii. There are now approximately 300 companies marketing noni juice. In 1996, Morinda Inc (now Tahitian Noni International) brought noni juice from French Polynesia to the western market. Today, most of all the noni juice in the world being consumed comes from French Polynesia, the marketing company being Tahitian Noni International. Noni juice has surpassed the black pearl to become the number one export of French Polynesia.

In August 2004, the US Food and Drug Administration sent a warning letter to Flora, Inc., over their website promotions of noni juice as a medical product in the context of various testimonials and claims of scientific studies. In the European Union, after extensive safety testing on one particular brand of noni juice (Tahitian Noni), the juice from the noni fruit was approved and registered in 2002 as a novel food by the European Commission for Health and Consumer Protection Directorate-General. In their report, the European Commission's Scientific Committee acknowledged and considered the existence of claims of health benefits of noni juice, but have made no endorsement of these claims in their report. No noni products have been licensed for medical or therapeutic use. Companies today must still apply to the European Commission for Health and Consumer Protection Directorate-General to have their own brand of noni juice included as a novel food under the initial approval.

In 2005, two scientific publications described incidents of acute hepatitis caused by ingesting noni. One study suggested the toxin to be anthraquinones, found in the root of the noni, while the other named juice as the delivery method.This was however followed by a June 2006 scientific publication in the World Journal of Gastroenterology which referenced the above cases. The researchers concluded that noni juice is not toxic to the liver in high doses. They also countered the previous publications by stating the insignificant quantities of anthraquinones in noni which cannot cause damage to liver tissue. The persons being studied in these cases had also been ingesting large amounts of other herbs over a prolonged period, causing some questions about the validity of the noni-toxicity correlation. The Physicians Desk Reference ("PDR") for Non-Prescription Drugs and Dietary Supplements lists only one particular commercial brand of noni juice, with no side-effects mentioned.Consumers of noni juice are advised to carefully check the label, because warnings may vary from brand to brand. The most common warnings are "Not safe for pregnant women" or "Keep out of reach of children." There are no warnings required for the specific brand mentioned in the PDR for Non-Prescription Drugs and Dietary Supplements. In addition, the European Food Safety Authority (EFSA) initiated an evaluation which determined there is no convincing evidence for a causal relationship between the acute hepatitis observed in the case reports and noni juice (specific for one brand only). They did not comment on the claimed health benefits of the juice. Some commercial brands of noni juice can be high in potassium. While potassium is a valuable nutrient in a normal diet, persons with advanced kidney disease cannot excrete it properly and should avoid certain brands noni juice which has been known to cause hyperkalemia, as written by Mueller et al. One month after the hyperkalemia paper publication, on March 28, 2000 Mueller pointed out in the USA Today that they had used the brand of noni juice from Body Systems Technology Inc for their study Of further significance is a scientific paper published by the International Journal of Food Sciences and Nutrition wherein it was shown that there is high variability in the amounts of minerals between various companies' brands of noni juices. The paper advised consumers, health professionals, and governmental / licensing bodies alike to be aware of these differences among brands. Athletes intending to use noni juice to supplement their diet should be aware that only two brands of noni juice are listed on ConsumerLab.com's "Athletic Banned Substance Screening Program" as having been screened for substances on the World Anti-Doping Code Prohibited List.