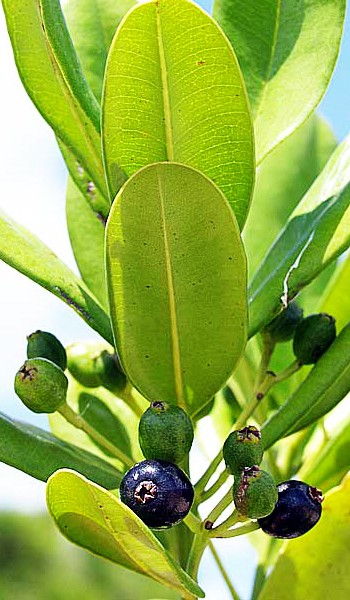 Lemon Bay Rum tree in a 3 gallon container. Unique variety of Bay Rum with a refreshing lemon scent. The bayberry or bay rum tree (Pimenta racemosa) is a broadleaved tropical evergreen native to the islands of the Caribbean. The bay rum tree is known for the essential oil present in the leaves and stems. The oil, composed of terpenes, has a clove-like fragrance. Bay rum first came about as a 'rub' for sore muscles, strains, and sprains. It was also discovered that the essential oil contains a diterpene that has anti-bacterial properties. Bay rum was a popular aftershave in the early 20th century. It is literally made with the leaves of the tree and rum. Consequently, the aftershave has its spicy notes from the bay and its smoky, woody tones from the rum aged in casks.

Propagation: By seeds.
Uses: Oil is distilled from the leaves and is used in perfumes. A type of cologne named bay rum was historically made by distilling the oil using rum and water.
Native Range: Native to the West Indies